Much heralded clothing chain is closing up 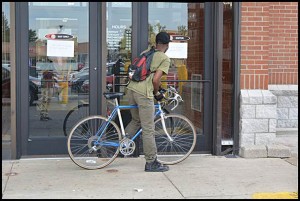 Value World is closing on Sept. 21 after three years serving the community.

By Charles Sercombe
Area hipsters’ favorite second-hand clothing store is closing in Hamtramck.
Three years ago a collective cheer went up when Value World announced it was locating in Hamtramck, next to Glory Market on Jos. Campau.
But that goodwill didn’t translate into profits for the used clothing chain.
“It was a slow store,” said Brian Kose, a manager for the chain, about the store’s earnings.
Value World will close its doors on Sept. 21.
Regular customer Tom Kaye said he often talked with store personnel and was told one possible reason for the closing was because of frequent shoplifting.
Kose said that although there were thefts “there was nothing unusual.”
Kose said that what mostly prompted the decision to close now is that the store’s lease is up at the end of the month.
He said he did not know off-hand the number of employees at the store, but there is a possibility of transferring them to nearby stores.
For bargain shoppers, now is the time to visit the store. Everything in the store is half-off.

2 Responses to Much heralded clothing chain is closing up