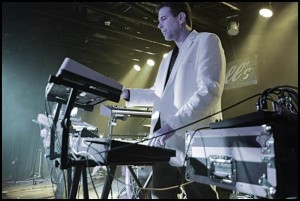 Local bars and halls were packed with music fans who came out to support a new music festival in Hamtramck.

By Daniel Voros
Special to The Review

The first-ever Hamtramck Music Festival brought out thousands of people to Hamtramck last weekend.
The weather went from decent, considering the winter we’ve had, to bitter cold. Despite the weather, the attendance went from decent to packed as the weekend carried on.

Sources from The Hamtramck Music Festival Committee, the group that organized the event in 37 days, said that approximately 2,500 people from across the metropolitan area came together to listen to 133 local bands at 16 different venues.

Eugene Strobe, cofounder and spokesman for the festival, said “It pretty much came together without a hitch.”
Strobe’s band, Cosmic Light Shapes, headlined the kick-off party at Small’s Thursday night. Three other bands including Atoms and Ease also played. Atoms, whose musical influences include the Red Hot Chili Peppers and Erykah Badou, got the crowd dancing with their blend of funk and rock. Lead singer, Cye Pie, said she was pretty happy with the set.

“The crowd was dope,” said Pie. 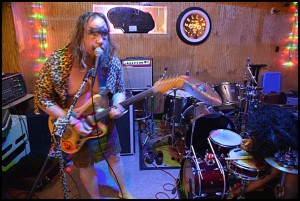 Caveman Woodman works up the crowd at Kelly’s Bar.

Bands taking to the stages and pool-table areas of the venues represented many shades of the musical spectrum. There were sounds of Motown, old fashion country-blues and hard-core punk echoing down the streets.

Melvin Davis, who was Smokey Robinson’s personal drummer for two years, threw his 45-release party at Paycheck’s Lounge Friday night. He took the stage with an eight-piece band, including a horn section, that shouted out a sound reminiscent of Motown. Or northern soul, as Davis called it.
Davis was pumped to be playing in Hamtramck.

“We’re all a little bit Polish when we’re in Hamtramck,” said Davis.

He said that the northern soul sound is big in Europe. He also said he was leaving for Spain early this week.  But, he’ll be back to play his next show in Detroit on May 3 at Trinosophes on Gratiot in Eastern Market — just in case you want to check him out, and you should.

A few steps further along the musical spectrum and into the weekend was the premier performance of Pony Drags. The duo, comprised of Rachel Skotarezyk and Richie Wohlfeil, was unpolished and intimate. Skotarezyk’s guitar was accompanied by Wohlfiel’s bass. Her high-crisp country voice was genuine. Her lyrics: personal.   The relationship between the two surfaced in their banter and the background Skotarezyk gave to each song.

The duo is so new that they don’t have music posted online as of now. 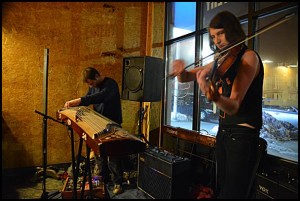 Sets like this made the weekend special. They played in Lo & Behold, a second-hand record, book and bike shop on Jos. Campau, owned by Wohlfeil. The shop was full. And though a lot of acts flow through the store on a weekly basis, Skotarezyk’s talent plus the intimacy of the set made the duo stand out.

In some ways the weekend also stood out from its predecessor, The Blowout. John Weier, who did sound for 7 Brothers Bar, thought the weekend felt, “less regulated. It maintained its structure, but it feels looser.”

“Feels nice not have a guy from Budweiser interfering,” he added.
Jeremy Waun, whose band Reverend played at 7 Brothers, felt similar to Weier.

“It was fun. It was wild and loose. 7 Brothers is amazing,” said Wuan.

The grassroots nature of the event was also reflected in some aspects of Hamtramck’s nightlife not changing.
Kevin LaPointe, a resident, said “beer prices are the same as they would be any other weekend in Hamtramck.”
As the festival approached its final hours the temperature dropped. At 1 a.m. Saturday night, as the Johnny Ill Band was getting ready for their set at Kelly’s Bar, it was 20 degrees outside. During the band’s third crowd-encouraged encore, at 2 a.m., or 3 a.m. considering that night’s switch to Daylight Savings, it continued to get colder, but inside the late hour and cold temps didn’t matter.
The crowd in Kelly’s erupted. People were shoulder-to-shoulder and on their feet, and some formed a mosh pit up in front of the band. A certain journalist was thrown out of the pit and into a wall.
Frank “Caveman” Woodman, who played before the Johnny Ill band and who was also moshing in the pit, said the festival was “amazing.”
“They did it in one month’s time. And the streets are alive. The streets are alive, mother f*%#er!” he shouted.
Woodman’s excitement was shared by many in the bar. Kelly’s Bar owner, Brad Ruff, said the festival was “F*%#ing excellent, off the hook. Better than The Blowout.”

As 3:30 a.m. rolled around and people spilled out onto Holbrook leaving Kelly’s, Ruff said, “It (the festival) was definitely more than what I expected.”

The festival will definitely have an encore next year.

“Next year we plan on continuing what worked, and only tweak a few things that we felt could have been better,” Strobe said. “The format will largely remain the same, but with more time to plan for next year, we should have a number of the kinks ironed out.”
Strobe said that the event actually came out of the weekend in the black.

“We made a profit this year, which 100 percent will go to Ben’s Encore charity, who will then present it to local music programs in order to give youth music lessons,” Strobe said.