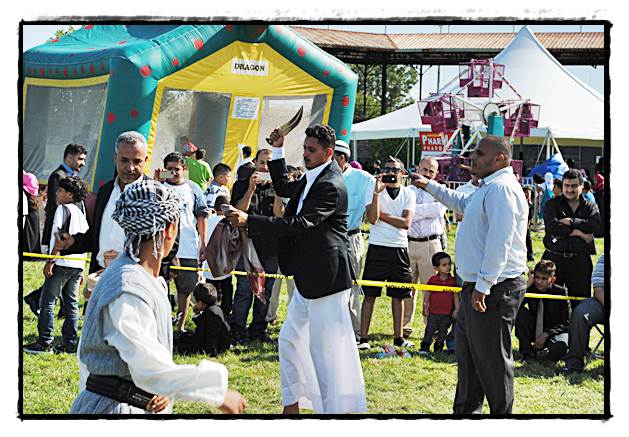 You may have noticed more daytime activity coming from your Muslim neighbors in the last week.

That’s because last Sunday (Aug. 19) marked the end of the Islamic holy month of Ramadan, during which observers fasted from sun-up to sundown.

To commemorate Eid Il-Fitr – which means “festivity of breaking the fast” and is commonly referred to as just “Eid” — the local Muslim community celebrated with a day at the park. But it wasn’t just an ordinary walk through it.
Thanks to the generous sponsorship of the Iman Islamic Complex-Masjid Mua’th Bin Jabil, along with Azaal Pharmacy and PharMor pHarmacy, a full carnival was set up in the outfield of historic Hamtramck Stadium, and for just $5 kids could have unlimited rides.

In addition to the mini Ferris wheel, spinning boats and helicopters, two-seat swinging pirate ship, numerous inflatable attractions and train that were on site, kids in attendance had the chance to play games like musical chairs and tug-of-war, and everyone walked away with a gift bag. A booth set up by Hamtramck Public Schools also had a Lego table on hand.

For the women, a rest tent was set up to offer them respite from the heat as well as a chance to catch up with friends. With a predominantly Yemeni make-up, male attendees partook in several lively cultural dances.

The day wasn’t all fun and games, however. At 8 a.m. an estimated 8,000 people showed up to the Imam Islamic Complex on Miller St. in Detroit for the morning adhan, or call to prayer. It was only afterward that the day’s festivities could begin.

Next year, Ramadan will occur between July and August, with Eid falling on Aug. 9. The festival will be back, and according to Masjid Mua’th member Mansour Algahaim, who was helping out with the train ride, you should mark your calendar.

“Next year we’ll have a few more rides and even more to do,” he said. “It will be even bigger and better.”