New market has an international appeal 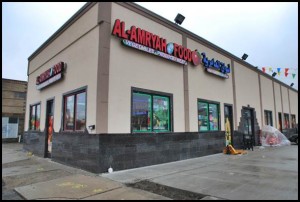 Located at the corner of Conant and Edwin, the business just opened its doors last week. Before that, the previous five months were spent transforming an old mechanic’s building into something worthy of its name.

And just what exactly does the name mean? While it’s hard to give a direct translation, store manager Ahmed says it loosely means “Old College” and is a nod to the Al-Amiriya Madrasa in Yemen.

The comparison is an appropriate one. The madrasa in Yemen was painstakingly constructed by skilled craftsmen and artisans, and in a similar vein the Al-Amryah building was also built to exacting standards.

Inside the building, the storefront was completely gutted and rebuilt. Two cash registers were added for quick check-out, and floor-to-ceiling freezers were installed for frozen food. A 22-car, well-lit parking lot was created outside, and the walls were affixed with shiny black marble. 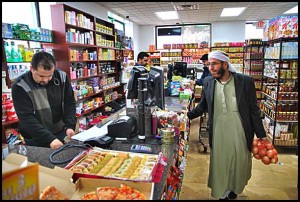 But the similarities between the two buildings don’t end there. Some people say the original Al-Amiriya building has a powerful and fragrant scent that comes from wood used to construct it. Similarly, the air in Al-Amryah is also very aromatic — just decidedly more spicy.

A final way the buildings are similar is their international stewardship. After falling into a state of disrepair, the original Al-Amiriya madrasa was rehabilitated by the Dutch and is now under consideration to become a UNESCO World Heritage Site. Being in Hamtramck, Al-Amryah will also undoubtedly exude cross-cultural appeal as well.

Of course, being in Hamtramck also means Al-Amryah is ready for anyone. In addition to the fruits, vegetables, halal meat, spices, toiletries, phone cards and perfumes that most people have come to expect from local grocery stores, one can also enjoy ready-to-eat food from an olive cart as well as unannounced daily and weekly specials.

“We try to have all kinds of food,” says Ahmed. “A little something for everyone.”

Al-Amryah International Foods is located at 9629 Conant (at the intersection of Edwin) and is open from 7 a.m. to midnight (or later) seven days a week. EBT and all major credit cards are accepted. For more information call (313) 872-0111.