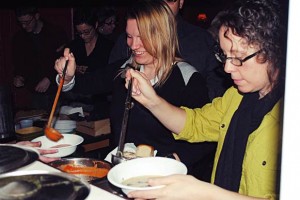 Despite white-out conditions from an ugly winter storm, the first meeting of Diverse(soup)city was a beautiful success.

Nearly four dozen people packed Maria’s Comida two Sundays ago (Feb. 20) night for the group’s inaugural event. Their response was overwhelmingly positive – especially compared to other city initiatives that have come and gone – and ensured that the event will be back in the coming months.

For anyone unfamiliar with Diverse(soup)city, it is essentially a monthly dinner group that votes on how to divide the money raised by each night’s $7 entrance fee. Attendees are given the choice between a number of local projects to help the city, and the one with the most votes is funded.

But that’s only half the reason to attend. In addition to voting on a project to fund, a night with the members of Diverse(soup)city promises to be an ideal way to meet new people and enjoy great food. February’s event featured a, well, diverse array of soups – Cream of Tomato Basil, as prepared by Chef Alan Pronko of Maria’s Comida, and Thai Chicken, as prepared by man-about-the-town John Lopez.

“There are so many people here – it’s crazy,” said Marie Pronko, a founding member of Diverse(soup)city. “And it’s not just people I expected – some of them I don’t even know!”

As for matters of funding, during this month’s meeting there were three ideas on the table. The first involved the city’s Weed and Seed program, and more specifically the fledgling radio patrol operation its Community Policing arm is trying to start.

The second pitch was made by the Hamtramck artist collective Hatch, which offered a proposal to fund a sign for its building on Evaline. Hatch founder Chris Schneider explained that a sign would help promote the building and would be an artistic asset to the neighborhood as well.

A final (and last-minute) proposal for funding was given by Recycled Treasures’ Director and City Councilmember Catrina Stackpoole, who urged those in attendance to fund the “Walk for Warmth” cause, which is a program that helps pay utility bills for those who cannot do so on their own.

When it came time to vote, it was a heated contest between the first two entries. Considering there was a large constituency of Hatch members in attendance, the showing by Weed and Seed was quite impressive. However, it was ultimately defeated by the Hatch proposal with a vote of 24-18.

Reflecting the fluid nature of Diverse(soup)city, Hatch’s Schneider said that though there was not a set plan on how the sign would be created – or even an idea of who would make it and in what medium – the money would go directly back into Hamtramck through the purchase of supplies and the employment of local artists.

“We have used a lot of volunteers to help get the Hatch building running, but it’s nice to be able to pay people for what they do,” said Schneider. “And this is definitely worth paying for.”