One school route that’s not so safe 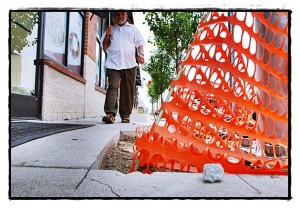 The school year is now entering its third week but there is still a waiting game to finish up the city’s sidewalk repairs.

The sidewalk at the southwest corner of Caniff and Gallagher – one of the most heavily traveled corners for students – is still not repaired. There is an exposed area that’s waiting to be filled with cement.

Public Services Director Martin Ladd said a work crew had scheduled to fill the corner during Labor Day weekend but they were told to hold off because parking was needed for the Hamtramck Labor Day Festival.

Ladd said the corner should be fully repaired within a week.

Until then, the corner is still a trip and fall waiting to happen.

The city underwent an extensive sidewalk repair program in the last couple of months, thanks to a $900,000 federal grant called “Safe Routes to Schools.” The sidewalk at Caniff and Gallagher actually wasn’t part of that program.

Wayne County installed new traffic lights at the intersection but had to keep access to the light’s electrical wiring until all the bugs were worked out with the timing mechanism.