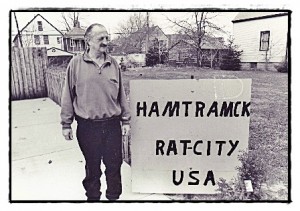 Well, brace yourselves. According to a poll of 200 Detroit area residents, Hamtramck is the fourth “rattiest” neighborhood in the area.

The poll was conducted by a private company hired by the d-CON company, which sells rodent control products.

The most rat-infested area is the Cass Corridor, according to the poll, which, let’s face it, is a way for the company to sell more of its products.

But, Hamtramck indeed has had its battles with Rattus norvegicus (the scientific name for the most common species of rat, the brown rat).

The worst infestation in recent memory was probably the late 1990s and early 2000s when city sanitation workers went on a work slowdown over a labor dispute with then mayor Gary Zych, and then later with Lou Schimmel, who was appointed the city’s emergency financial manager.

The infestation was also blamed on residents who threw open garbage into the alleys, or placed plastic bags out in the open for the rats to chew through. The problem was put under control when the city issued garbage cans with secure lids to every household.

Still, there are some alleys with garbage piled up outside of cans, or overflowing from the cans.

All of this reminds us of one of our favorite jokes about rats, authored by Detroit-born comedian and actress, Lily Tomlin:

“The problem with winning the rat race is, you’re still a rat.”