Record Store Day is this Saturday 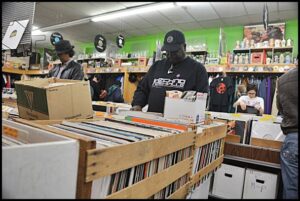 By Alan Madlane
Tomorrow, Saturday, April 23, is the first Record Store Day of 2022. For those not in the know, the day was created, in 2007, as a way to stimulate buyer traffic for small, independent record shops.
Thankfully for those stores, not only has vinyl exploded once again (even in the face of rocketing prices), but now cassettes and CDs are becoming popular once more.
Here in town, we have two stores that sell records as a sole, or major, part of their wares.
Detroit Threads, 10238 Jos. Campau, will once again be participating in Record Store Day. Record Graveyard, at 2610 Carpenter St., has once again chosen to opt out of the madness. However, the store is offering is offering a 50 percent discount on its stock.
Lines typically start forming well before stores open, with collectors wanting to have first crack at the selection of limited-edition items that come out specially for the day.
Lately, due in part to Covid, there have been multiple days each year. Last year, there were three separate dates. Too much of a good thing? Some have suggested so.
This year, there will be a second day June 18. Not only that, but the day before Thanksgiving has started becoming a kind of de facto extra RSD.
Full albums, EPs (extended players), 12” singles, 45s, CDs, the occasional cassette, sets of albums or 45s – whatever your collecting media type(s), it’s all there. Not only that, but many stores hold back their best selection of recently acquired used items for the day, too.
Check out recordstoreday.com for a store finder (there will be a number of stores across the metro area that participate) and a list of the expected releases, with descriptions.
And have fun!
Posted April 22, 2022