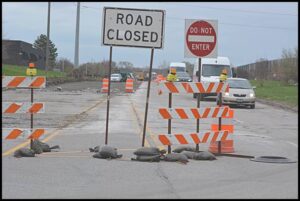 After years of complaints about the condition of Hamtramck Dr., the city is now able to repave the road thanks to a federal grant. The project should be completed by fall.

By Charles Sercombe
If it’s spring, there is one guarantee besides warm (OK maybe warmish) weather: the return of orange road construction barrels.
After years of complaining – even almost immediately after the road was paved – Hamtramck Dr. is being torn up and repaved, from Conant to Jos. Campau.
The road has long been plagued by potholes from heavy trucks serving the various industrial businesses on this outpost of the city.
Getting that road repaved was no easy task, as different sections of it are owned separately by Wayne County, Detroit and Hamtramck.
How that arrangement came about is not immediately known, but anyone who understands about getting different government agencies to coordinate projects can tell you, well, the less said the better.
Detroit is planning to continue repaving the road from Jos. Campau to all the way around to the other side of the GM plant.
The road is part of the ongoing Joe Louis Greenway project that will create a bike/walking path from Hamtramck to Dearborn and Detroit.
The Hamtramck portion of the project is being funded by the federal government, to the tune of $1.6 million. The city has to kick in about 20 percent of that cost, which it can through its annual state-funded road repair fund, called Act 51 funding.
Also being repaired is the final leg of Conant Ave. The county has been heading up this project for the past few years. The road has been repaved from McNichols (also known as 6 Mile to you westsiders) to Holbrook.
Work crews are putting on the finishing touches from last year, and it should all be completed within a few weeks.
The Hamtramck Dr. project will take all summer and likely through fall.
Posted May 6, 2022