Rocker-columnist-entrepreneur Melody Baetens has been living the Detroit rock ‘n’ roll dream since high school, and doing it full throttle. 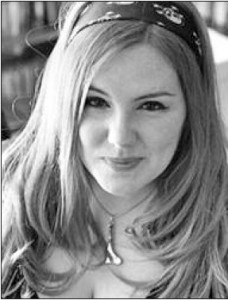 Baetens, who recently became an owner of Small’s Bar in Hamtramck, started her first band in 1996, and in 1999 joined musician and Detroit Free Press entertainment writer Rachel May’s glammy metal grrlz group Broadzilla. That same year, she became an editorial assistant at the Detroit News and is still a staff writer at the paper, where she covers Detroit nightlife.

After she left Broadzilla, she started the punk band Stroker Ace and began playing bass for the Gore Gore Girls. In 2003, Baetens joined the Coronados, an Ann Arbor-based band with origins in Argentina. The group toured South America in fall 2004. “I was the tallest, biggest, blondest thing that the Buenos Aries music scene had seen in some time,” she says. “With my wig and platforms, I was twice as tall as most of the other girls who came to see us play.”

As if that didn’t keep her crazy-busy enough, she also became the guitarist in The Sirens, which released three singles and two full-length albums before going on hiatus two years ago. She’s played with the Vamps and the Swamp Sisters, recently recording a few of the band’s tracks with Zach Shipps of the Electric Six, to be released this summer on Bellyache Records.

What a rockin’ resume. And now, as part owner of Small’s, which she runs with partners Mike and Natalie Mouyianis, she buys talent via Stranglehold Booking, a company she started in 2006.

We tracked Lady Baetens down at Barberella’s salon in Hamtramck, where she was getting her hair teased out for another high-volume weekend out on the town.

Q: Holy smokes, how do you it all: performing, promoting music as a business owner at Small’s and writing for the News?

A: I run non-stop most of the time, and I also take kickboxing classes twice a week, but I’m always sure to take it easy when the day is over, usually by having some drinks with friends at Small’s. I’ve been at The News for 10 years, but I’m still challenged there, and I like that. Small’s is the new thing. I love it. I used to do similar promoting and booking at the Belmont Bar, but it’s a larger scale at Small’s because it’s my bar. I couldn’t do the Small’s thing without Dave Malosh, my boyfriend. He’s my anchor and he is always supportive and encouraging.

Q: How has Detroit and the city’s rich musical history shaped your life?

A: I think everyone who is in the local music industry in any way is aware of the unique and rich music history Detroit has. Personally, I grew up listening to so many local artists on the radio – Motown, Bob Seger, even Madonna. I think seeing people from your hometown become successful breeds confidence in artists from Detroit. Also, when a musician from Detroit makes it big, he comes back and tries to get his friends exposure, too. Kid Rock, Eminem and the White Stripes all did that. I think the success of the White Stripes, Dirtbombs and the Detroit Cobras is what made it easier for the bands I played in – Gore Gore Girls, Sirens – to get offered to tour Europe.

Q: Can you imagine doing what you do in any other place?

A: Well, here I’ve been able to make my own thing work for me. If people want to do something in Detroit, they don’t wait for anyone else, they do it themselves. But it has to be authentic. If it’s not, you’ll get called out for it.

Q: You’ve been in bands that have made an impact in other cities in North America and around the world. Talk about some of the coolest places you’ve played and some of the most interesting people you’ve met.

A: I think the most unique experience I’ve had was touring Serbia with the Sirens. We went there in May and June 2006. The tour was promoted very well, and we had everything we needed, including meals, hotels, transportation and a translator. We ate a lot of meat and drank a lot of beer.

The fans that came to see us loved the shows, got drunk with us and we had the time of our lives night every night. It was sad and interesting to see that many of the people who came to see us had just enough money to get into the show and buy a beer, and that was it for extra money that week. We ended up giving most of our merchandise away. Buenos Aires is super cool, too. The rock scene there is awesome. It has a little bit of everything -garage, funk, soul – kind of like Detroit.

Q: What do some of your international fans and friends think of Detroit, even those who’ve never been here?

A: Every time I leave the city and I tell people I’m from Detroit I’ve gotten a reaction. It can be an “oh cool!” reaction, or an “ooh, scary!” reaction, but everyone knows about Detroit, and its musical history, especially in Europe.

Q: You’ve been living in Hamtramck since 2003. You’ve been a big advocate for the city’s cultural life.

A: You can walk to your favorite bar. You can walk and do your grocery shopping. No matter who you are – a rock musician or an immigrant – it’s likely that you have friends that live just a few blocks from you. I love that I can get authentic Polish food like my grandma used to make. No other city has a Metro Times Blowout. Our Labor Day Festival is a hometown festival, it isn’t overrun by corporate sponsors. I could go on and on about what makes Hamtramck special. Each year, we volunteer at the Hamtramck Labor Day Festival, usually working the beer tents, and in 2008 I also booked the music for the festival. I’m excited about the city’s cleanup day on May 16, and it’s great that we are moving forward to getting a central recycling center soon (at Hamtramck City Hall). Now that we’re running Small’s, I’m extremely happy to be a Hamtramck business owner, it’s like a dream come true.

(This story first appeared in www.modeldmedia.com.)