Rolling out the school millage message 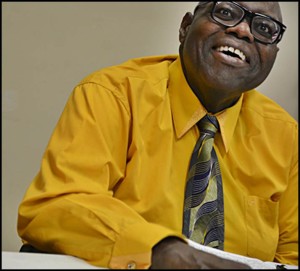 School Board President Titus Walters: “We’ve always been fighting the war on the cheap. All I’m asking you is to fight the fight.”

By Charles Sercombe
Supporters of the upcoming school tax millage couldn’t have picked a better place last Thursday to underscore the need for school repairs.
Inside the Hamtramck High School Community Center’s gym, where a town hall meeting was held, a bucket was on the floor to catch water dripping from a leak in the roof.
Built 30-some years ago, this is the newest building in the district, which boasts most of its buildings being in the 100-year-old age bracket.
The district is hoping voters will approve a 4-mill tax on May 6 that will be used to fix up buildings. The to-do list – which  is lengthy — includes roofs, windows, heating systems, floors, restrooms and security devices.
“We’re investing in ourselves, our children,” said District Superintendent Tom Niczay.
Voters may ask why the district waited so long to make major repairs. Niczay said that it’s not because of an oversight of previous administrations, but due to tight budgets with little wiggle room.
“They’ve done their job,” Niczay said of past maintenance projects given the OK. “But things get old. You can only patch for so long.”
While some of the buildings are marvels of architecture, such as Hamtramck High School and Kosciuszko Middle School, looks can belie the problems within.
Take Kosciuszko. The school was designed by famed architect Albert Kahn and built 100 years ago. But during all those years there has not been an upgrade of significance to its heating system.
The school still has exposed radiators, some of which become super hot while others struggle to distribute heat, Niczay said.
Holbrook Elementary School has the distinction of being the oldest school in the state.
But as you can imagine, despite renovations over the years, the building has problems, lots of problems.
For Niczay, it has a special place in his heart. It’s where he first started out as a principal after serving as a teacher in the district. The school may be an old lady, but it’s a dignified old lady and still functions.
“I call it the Palace on Alice,” he said, referring to the street it’s located on. “It’s a great place, a warm place. Kids want to go there.”
Niczay said the cost of the tax will come out to an extra $72 per year for the average household, or less than 20 cents a day.
Or to put it in another perspective, School Board President Titus Walters says a typical video game runs about $60 – and that’s just one game.
Walters offered other ways to look at the millage. He said the school district is now the city’s largest employer.
“If our buildings fall apart, there goes our district,” he said. “This is a community thing.”
On the subject of school finances, Walters said the district has always had to scrape by and accept whatever state financial aid was doled out in any given year, no matter what the district’s needs were.
“We’ve always been fighting the war on the cheap,” Walters said. “All I’m asking you is to fight the fight.”
(Supporters of the school millage will hold another town hall meeting next Thursday, April 17, 6:30 p.m. in the Hamtramck High School Community Center.)