Schools are still a mix of languages 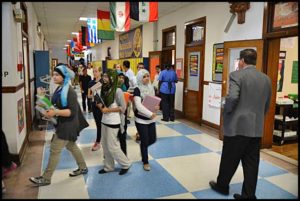 In Hamtramck Public Schools, where over 3,000 students are enrolled, 16 languages are spoken.

By Charles Sercombe
At one time, a couple of decades ago, it was said that there were close to 40 languages and dialects spoken in the public schools.
That number has come down by more than half over the years.
According to statistics compiled last year by the school district, there are now 16 languages spoken in the schools.
At one point, the city was predominantly Polish, with a smattering of Albanian immigrants.
Those two ethnic groups are long gone from the city.
Now the main language in the schools is Arabic, which reflects the city’s ever-changing ethnic make-up.
The next most prevelant language is English, with Bengali and Bosnian rounding out the top four languages you can hear in the school hallways on any given day.
Last year, there were 3,650 students enrolled.
Here’s a breakdown of the languages spoken in the district:
Arabic: 1,384
English: 1,164
Bengali: 916
Bosnian: 71
Urdu: 18
Polish: 17
Ukrainian: 13
Albanian: 11
Uzbek: 6
Spanish: 4
Hindi: 3
Somali: 2
Macedonian: 2
Slovenian: 1
Amharic: 1
Armenian: 1
Russian: 1
Those students who speak Arabic are mostly from the war-torn country of Yemen.
Alisa Perkins, an anthropologist and assistant professor of comparative religion at Western Michigan University and a scholar with the Institute for Social Policy and Understanding, has been studying the Hamtramck Yemeni community.
She said the district has made the right moves to address the needs of this growing student population.
“The Hamtramck Public School system has responded admirably to the recent growth of the Yemeni community,” Perkins said in an email with The Review.
“Most important was the decision to hire superintendent Jaleelah Ahmed, a Yemeni-American woman with a long record of achievement in education.
“Since beginning her work in Hamtramck as ELL director, Mrs. Ahmed has demonstrated a keen understanding of how to effectively work with recently arrived Yemeni American students and families to maximize their success.
“An important marker of her approach is her successful effort to extend educational services to the parents, and especially the mothers, of recently arrived Yemeni students.
“Mrs. Ahmed is just one of many Yemeni-American educator activists who have recently gained prominence in the city for their dynamic contributions to education.
“The list also includes, among many others, school board members Jihan Aiyash, Salah Hadwan, and Moortadha Obaid; Tau Beta Principal Nabeel Naji, and teacher Nawal Almasmari.
“It also includes local activist Emad Shammakh, who in his capacity as Vice President of the Yemeni American Leadership Association (YALA), has created dynamic adult education programs for local Yemeni-American women.
“I have been working closely with councilman Saad Almasmari and other members of Hamtramck’s Yemeni-American community over the past months on a project that will enhance the recognition of the Yemeni-American community in the city, by offering public education about Yemen and Yemeni-Americans, and by also promoting Yemeni-American businesses. Hamtramck is at the center of the Yemeni-American community nationwide.
“Yemeni-Americans have been creating communities in the United States since the end of the 19th century, and have notable populations in Michigan, New York, California, and other states.
“However, the Yemeni community in Hamtramck is notable due to its size, its concentration, and the density of its institutional life. Hamtramck is fortunate to be the preferred destination of so many Yemeni-American migrants.
“They put down roots in Hamtramck, build businesses, and take a leadership role as stewards of the community who see their success and prosperity as part and parcel of the success of the city as a whole.
“In the years to come, I think that we will witness even more expansion, growth, and improvement of city resources due to the contributions of Yemeni-Americans.”
Perkins has compiled her research in a soon-to-be published book called: “Muslims in Metro Detroit: Gender and Religious Boundaries in Urban America” (NYU Press).
Sept. 13, 2019