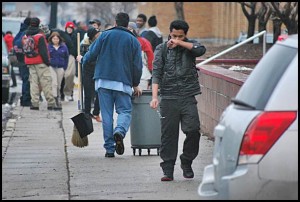 If Congress doesn’t prevent massive cuts to the national budget, Hamtramck Public Schools will have to lay off teachers and end federal programs.

He urged Peters to find a way to cancel the cuts.

“These cuts would affect millions of students and lead to potentially significant job losses and program eliminations for the nation’s schools, the educators who run them and the students they educate,” Niczay said in his email. “I am asking you to take immediate action, as a member of Congress, to work with your colleagues to avoid these deep cuts which would be devastating to our district and students.

Peters and other Democrats in Congress have been railing against Republicans for allowing the so-called sequester (which is a fancy term for budget cuts) to go through.

The district receives almost $5 million a year for six federal programs, Niczay said. If Congress does not stop the sequester, Niczay said federal funding for next year will be reduced by $261,348.

“That will mean layoffs of teachers and paraprofessionals,” Niczay told The Review.

He also said it would lead to canceling after-school programs, tutoring and possibly summer programs.

Niczay said the stalemate leading up to Friday’s deadline is an example of “the ugly side of politics.”

“It’s the lost art of compromise,” he added, “something our country was built on.”

The public schools would not be the only institution affected. The cuts would apply to virtually every government agency, including the military.

One Response to Schools superintendent warns of massive cuts by Congress