Search is now underway for a city manager 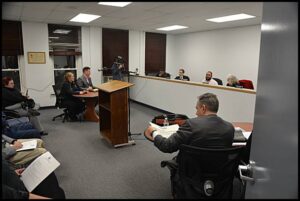 The city recently posted the job opening for city manager on its website.

By Charles Sercombe
The job opening for city manager has finally been posted.
The city council has known that the position would be open since last June, when former City Manager Kathy Angerer announced that she was leaving to take a new job.
During that time, the council hired a deputy city manager, but delayed posting the city manager job until recently, when a council subcommittee was formed.
The qualifications for the job, which will pay $100,000 to $120,000 are lengthy.
For example, there are 48 “essential job functions,” some of which include:
o Develop annual budgets
o Oversee day-to-day operations
o Assess community needs
o Attend various meetings
o Oversee payroll processing
o Negotiate contracts
o Identify, monitor, and control nonconforming uses

Under the category of “desired qualifications,” there are 32 points, which include:
• Have a master’s degree in public administration, public policy, or a combination of equivalent education and experience
• “Good” knowledge of the city charter
• Knowledge of modern office procedures
• Skill in taking minutes
• Knowledge of traffic calming measures
• Skill in operating office equipment
• Ability to maintain complex record-keeping systems and prepare comprehensive reports
Another qualification is that candidates have at least three years of experience as a city manager or assistant city manager in a city with a population of at least 10,000 people.
So far, the job has been posted only on the city’s website.
Applications for the job must be submitted by Jan. 10.
Posted Nov. 23, 2022