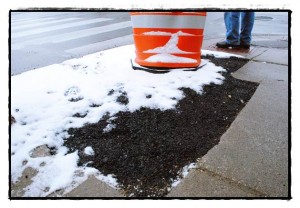 Lately, walking down the city’s streets has been a little safer.

After the final installation of new traffic lights on Caniff was delayed for months due to a dispute between contractors, the gaping holes left in the wake of the disagreement have finally been filled. However, the work isn’t finished just yet.

Because of the winter weather, the dangerously large – and deep – holes were filled with a material called cold patch, which is an asphalt-like material that is used when temperatures are too low to allow concrete to dry. When things warm up, workers will return to dig up the cold patch and fill the holes with concrete.

The dispute erupted just before the work was scheduled to be completed earlier this year. The company in charge of installing wiring for the lights held up construction when it had problems with its contract. But because the money for the repair work came from the federal government, the city had no leverage in forcing the company to finish the job.

“They have to butt heads until somebody gets a headache,” said Department of Public Works Director Marty Ladd, “but now it’s back to work.”

In other street-side news, construction on the sidewalks of Jos. Campau will continue for another month or so. The road is undergoing routine maintenance work on its gas lines, which should be completed in a few weeks. But like the other repairs happening throughout the city, workers will return in the spring to give the holes a more permanent concrete finish.