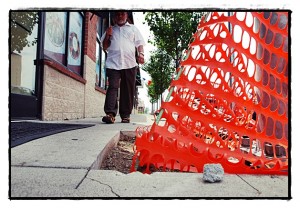 Don’t look for any immediate repairs to the sidewalks at the Caniff-Gallagher intersection.

And no one is more frustrated by that than Martin Ladd, the city’s Director of Public Services.

It’s been over two months since the state funded the installation of new traffic lights at the intersection. The corner of the sidewalks at all four points were ripped out to install control boxes. But the sidewalks have yet to be cemented over.

Ladd said that’s because a dispute erupted between Detroit Edison and the contractor.

And it looks like there is no end in sight as to when the two sides will settle their differences and allow repairs to continue, Ladd said.

“I told them to finish the job,” Ladd said. “But now somebody might get hurt.”

The intersection is traveled heavily by high school students. Ladd said he’s warned Edison and the contractor that the site is a trip and fall accident waiting to happen.

“There’s not a week that goes by that I don’t ask them to fix it,” Ladd said.