State comes under fire for decision on recycling plant 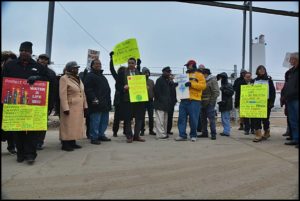 Demonstrators gather in front of U.S. Recycling last year to protest a plan to allow toxic wastes to be processed there. The state recently gave the plant permission to do just that.

By Charles Sercombe
Despite numerous protests and demonstrations, state officials gave US Ecology permission to process toxic material.
The recycling plant is off of Mound, about a mile east of Hamtramck.
For the past four years, residents have been opposing to allowing the plant to accept toxic material, for fear that it could endanger the health and well-being of the community.
Last week, the state Department of Environmental Quality gave the company to the OK to handle 4,500 tons of toxic material each day.
State Rep. Isaac Robinson (D-Detroit, whose district includes Hamtramck), has been in the lead against allowing the material to be stored at the site.
He and local activists and environmentalists have said some of the material is fracking waste, which contains radioactive material.
In an email to The Review, Robinson said he found the decision:
“Shocking, alarming and disturbing. In light of the Flint Water Tragedy and the discovery of thousands of contaminated sites across Michigan, it is disheartening to watch corporate special interests muscle state and city government in Detroit to get their way, to make Wayne County a one-stop shop for all the dangerous waste this side of the Mississippi.”
Robinson sponsored two bills that would have banned toxic material being processed in the state and at the Detroit site, but neither bill was ever allowed to be considered.
The Coalition to Oppose the Expansion of US Ecology issued a press release saying: “(We) had hoped the new administration in Lansing would enforce policy protecting public health over industry profit. But they chose to ignore the demands of the community, elected officials and local government. This environmental racism must stop.”
The coalition added that there was an upside in the fight against the plant.
“Despite the expansion, one of the positive outcomes of our protracted battle is that the diverse community of Afro-Americans, Arabic and Bengali immigrants, residents of every color, religion and language and the poorest community in the state, came together to fight to protect our health against environmental racism. Hopefully the community will continue to build on this strength.”
Feb. 7, 2020