The Clock gets a rewind, this time with soul 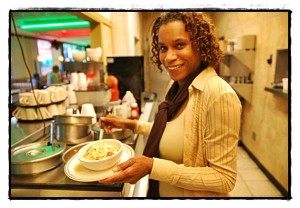 “Bless this bread, bless this meat. Bless this belly, ‘cause I’m gon’ eat!” – The Reverend Williams, from the 1997 film “Soul Food”

It seems like just a short time ago that we did a piece on the grand reopening of The Clock Restaurant, after a number of fits and starts and false hopes.

Now, it’s reopened again, in its latest incarnation as a soul food palace.

We spoke with Leka Horn, the owner, after the lunch rush had quieted down. There was still plenty of noise in the background, and Horn says that the restaurant is doing “way better than it was before.”

“We’ve been reopened for about a month and a half now,” Horn said. Asked how she came to acquire the building, she said, “It’s legally complicated. Actually, I’ve owned the building since the 90s.”

When she couldn’t keep someone in there to pay the rent, she decided to take matters into her own hands. This, in spite of already operating one restaurant out on Woodward in Highland Park, called The Classic Café Coni Island. If that name sounds familiar, it might be because that restaurant unfortunately was in the news twice in 2006, due to a couple of unrelated murders that occurred there that year, including a spectacular gangland-style hit involving assault rifles.

One can hope that this location will prove somehow less, well, dramatic.

The other restaurant is where Horn first introduced soul food. At that point, it was a gimmick she tried only during the week, but it ended up doing very well. When she opened up this place, well, she figured it was worth a shot.

“We already had these items on the menu – chicken, pork chops, liver. We just started cooking them southern style,” she laughed. “And I added some side dishes, like yams, (collard) greens, green beans, black-eyed peas.”

Customers have really responded to the addition, she claims.

“Just this morning, I had this man give me a big hug. ‘Thank you for having soul food,’ he said to me,” she went on, laughing again.

She works, she says, seven days a week, 16 hours a day on average. As in its other versions, the restaurant is open 24 hours, ‘round the, well, clock.

Asked if she could ever remember Hamtramck having a soul food restaurant in the past (something even my crotchety old editor couldn’t even spill out of his musty, shriveled and ancient brain), she mentioned a man that she knew who used to do soul food out of the Americana Market.

He was doing well with the idea, until his cook ended up in jail. Why wouldn’t he just start it up again with a new employee?, I wondered, and she wondered back as well.

Asked if she was afraid the parking situation might start to deteriorate if the former Shadow/Ice Bar ever follows her lead and reopens, she answered comically one last time.

“We hope we won’t have any room in the lot because of our own businesses’ success,” she said.

In any case, she seems to have her finger on the pulse – or the stomachs – of Hamtramck.