The smoke has cleared on Faber, but not burned houses 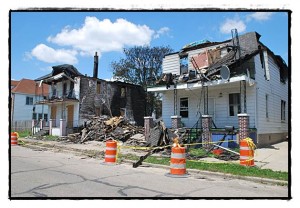 It’s no prize, either.

But now with three houses recently burned down on the east end of the block, the street has become a scene out of a warzone.

Two weeks ago, a fire broke out at 2449 Faber, an empty house, and quickly spread to the occupied houses on the left and right.

The cause of the fire has raised speculation among some neighbors. There is talk that maybe the fire was set intentionally.

Fire Marshal Paul Wilk said the middle house, where the fire started, burned so thoroughly, right down to the basement, that he can’t recover evidence. From what he has heard from neighbors, kids were playing with fireworks inside the empty house.

Henry Bentley, who lives down the street and says he is a former Chicago firefighter, dismisses that theory.

“The only way it could burn that quick is from an accelerant,” Bentley said.

By the time firefighters arrived on the scene, all three houses were engulfed in flames.

It took several hours before firefighters could pack up and leave.

Wilk said he does not know why the fire burned so quickly and with such intensity.

As for the burned out wreckage left behind which has caused a major blight on the street, Wilk said he’s working with the insurance companies that have policies on two of the houses, and hopes to have the debris cleared soon. 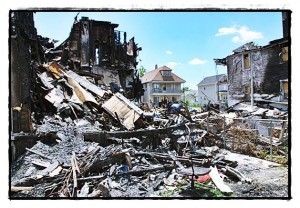 The middle house, he said, appears to have no owner. That’s the house with the exposed basement. Cleaning up that mess, Wilk said, may take longer.