There was big news all year-long

While choosing this year’s top news story was a no-brainer, that’s not to say this was a slow news year.

We could have easily picked from several other topics that came up during the past 12 months. Next week, we will feature part one of our two-part recap of what happened during the year. But for now, let’s take a quick look back at some of the other top news contenders of the year, in no particular order.

The beginning of the year sure looked promising. In February, local elected officials and dignitaries gathered together at the newly constructed state Department of Human Services building on the northend of Jos. Campau for a grand opening ribbon cutting ceremony.

It was, as State Rep. Bert Johnson said, a “magical day.”

The 30,000 square-foot building put hundreds to work building it, pumped hundreds of thousands of dollars into the local economy and houses 200 employees who oversee thousands of clients.

The development was much needed in the city’s blighted northend where one business after another closed down in recent years. Mayor Karen Majewski noted that the site of the new building was the former Woodrow W. Woody’s famed Buick dealership.

Woody was a well-known businessman in town and was also known for his selfless philanthropy. The new state building was aptly named after Woody.

“It’s a concrete reminder that we move forward only by recognizing our past,” said Mayor Karen Majewski at the ribbon cutting.

If only the rest of the year looked so optimistic.

The beginning of the year also meant planning for the upcoming 2010 national Census. The count officially kicked off in April, but the city prepared well before by forming a Census committee to make sure our ethnic neighborhoods participated.

The Census happens only once every 10 years, and the population count is used to calculate how much each city will receive in federal grants and projects. Just as every vote counts in an election, so does every resident when it comes to the Census: the more residents we get counted, the more Hamtramck would be in the pipeline for federal grants.

Ah … lofty words indeed. Sad fact, though, is from what we heard, the Hamtramck population count will be down a thousand or so despite the city’s best attempt to “get counted.”

Hamtramck’s Police Department has had a rocky relationship with the community over the years. There have been accusations of discrimination and excessive use of force. Well, those accusations reared up again after the arrest of a local pastor.

The NAACP and other civil rights activists held a rally in Zussman Park, right across from the police station in City Hall, to protest the behavior of some officers. Activists pointed out that there are only three African-American officers in the department, which has about 50 officers and detectives. 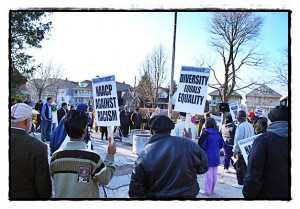 Months later, one of those African-American officers filed a racial discrimination lawsuit against the department, saying a supervisor used the “N” word in talking to him and denied him participation in a training exercise.

And there were more police-related developments. A new state law was proposed to close down so-called speed traps throughout the state. Hamtramck was cited by an independent organization for having several speed traps.

It was also noted that Hamtramck, like many other communities, failed to conduct street surveys to calculate appropriate speed limits, which is required by state law. And to make matters more embarrassing, the union representing Hamtramck’s police officers promised that officers working a special traffic enforcement program would issue at least $60,000 a month in traffic tickets.

OK, let’s move on beyond the Police Department.

The public school district also suffered financial problems. The state was forced to cut back on the money it shares with all of the school districts in the state, and at the same time Hamtramck lost an additional $1 million in student revenue because of a loss of 150 students.

In short, the district is facing a $2.8 million deficit and will be forced to close down Dickinson West Elementary School next year. The school is located in the former St. Lad’s school, which drains the district of lease money.

There were some other questionable money issues within the school district. But this time it was a case of an embarrassment of riches. In the Recreation Department, some $5 million a year is collected from a special tax.

Just where does that money go? Over half of it goes directly into the pockets of employees. The remainder of the money is spent on what appears to be over-inflated projects, according to study conducted by The Review of the Recreation Department’s budgets and projects.

For example, the Recreation Department spent over $115,000 on a spit-sized splash pad – costing about twice more than what other communities have spent on similar projects.

Perhaps the most eye-raising expense was for an outdoor restroom at Playfair Park that cost taxpayers $55,000. That was for one bathroom for men and one bathroom for women. Worse yet, the restrooms are closed most of the time.

Rec officials said they keep the restrooms closed because of the threat of vandalism, which posed the question: why build it in the first place?

After years of waiting, a dream came true. The city’s Historical Commission was able to tap into a state grant to purchase the former PLAV Post 1 on Holbrook to convert it into the city’s first-ever historical museum.

Fundraising for the new museum is ongoing, but there should be something in place for the public within the year.

There was good news also over at the Hamtramck Housing Commission. For the third year in a row, the city’s public housing agency earned the rating of “High Performer.”

The federal housing agency HUD gave Hamtramck that rating based on the commission’s management of its 400 low-income apartment units and for coming within budget.

Housing Executive Director Kevin Kondrat said there will be more “big” news in the months to come. But that will be a story for next year.