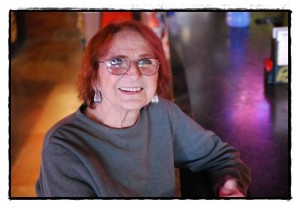 At Jean's Bar, characters are always welcomed. Perhaps the biggest character hanging out there is the bar owner, Virginia Szymanski.

Forty years ago, imagine that. It’s 1971, and it was a much different world back then.

A gallon of gasoline cost 40 cents.

Movies were only $1.50. The most popular movies were “Love Story,” “Summer of ’42,” “Carnal Knowledge” and “The French Connection” – among many others.

The voting age was lowered from 21 years old to 18 years old.

Cigarette advertising was banned from television.

Jim Morrison of the Doors died at the age of 27 in Paris.

And Virginia Szymanski and her family became the new owners of Jean’s Bar, located on Jos. Campau and Commor.

This Saturday, Virg, as everyone calls her, will be celebrating the bar’s 40th anniversary. Virginia, believe it or not, is now in her 80s, and you’d never guess that by looking at her.

Before her family bought the bar, it was famous in the 1940s and 1950s for attracting big-name acts that came through Hamtramck, which was once on the national entertainment radar.

People like Danny Thomas and Peggy Lee would play down the street at the now long-gone Bowery and sneak over to Jean’s Bar, which back then was called the Commor Bar, for a drink.

Those heady days are, of course, history now, but there is still one top performer who makes regular appearances here.

As you can see, she’s a wisecracker.

On Saturday, there’s going to be plenty of food and drink specials, and most importantly, Virg herself.

One thing, though. Don’t expect 1971 beer and drink prices.

Still, you can’t find much better prices around here than at Jean’s, no matter what year it is.

Not feeling the holiday spirit yet?

Well, no matter whether you are in the mood or not, head on over to Maria’s Comida restaurant today (Friday, Dec. 9).

The Pronko family is throwing an ugly Christmas sweater contest. Marie Pronko, a co-owner of the restaurant, says she has an old Polaroid camera to take photos of contestants.

We’re not sure what the prizes are, but who cares? This is the one and only time you can proudly wear that ugly sweater your aunt or parents or sister gave you.

Dang, wouldn’t you know it, Toast of the Town got rid of all those sweaters just a few years ago.

Still, we plan to drop by just for the fun of it. At 6 p.m., live music will start, and the party runs until 9 p.m. Marie also encourages those of legal drinking age to bring your own booze. Oh yeah, that Santa fellow will be ho-ho-ho’ing around and sipping on eggnog.

Hey kids, don’t get any funny ideas about spiking that eggnog behind our backs! Just in case, Toast of the Town will stand guard, heh-heh.