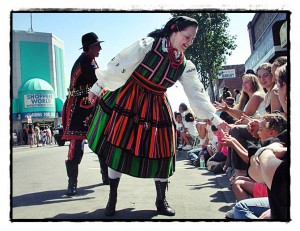 We haven’t really said too much about the recent closing of the Under the Eagle restaurant, located in the southend on Jos. Campau near Jacob St. Rumors had been going around town that the venerable Polish eatery was on its last legs for the past few months.

We even heard of a deal with one of the owners of A & C Market, which is right next-door, to keep the place going, but it fell through. Under the Eagle will be greatly missed, and its owner Terenia Peczeniuk was a Hamtramck treasure.

For us, Under the Eagle is the source of precious memories of Hamtramck in the early 1980s and the former Lili’s 21 Club, which was located around the corner on Jacob. Toast had an old buddy who was enamored with a certain waitress who worked at the restaurant, who is most likely long gone from the establishment.

We’d come early to town just to catch a dinner there, and to possibly talk our waitress into a couple of drinks at Lili’s. Our memory is a little rusty (too much Jezynowka?) to remember how that plan worked out.

Probably not as intended.

But that’s the charm of youth: Nothing pursued, nothing gained.

No matter, the Polish cuisine was enough of an education. Toast has to admit we’re not Polish, and we grew up on the west side – a world so very far apart from Hamtramck. Needless to say, the sight of pierogi and potato pancakes and city chicken was an eye-opening experience.

So … with fond memories now so distant, we salute Under the Eagle, and wish Terenia a well-deserved retirement.

Hey, speaking of eating Polish food and drinking with Polish buddies, an upcoming annual celebration has our name on it. On Monday, April 25, think of a good excuse to get the day off or skip class or drop whatever you have planned and instead celebrate “Dyngus Day.”

Never heard of it?

Well, it’s a Polish-American tradition where you take the day off to eat Polish food and celebrate all things Polish. It apparently started in Buffalo, New York, but there is no reason why Hamtramck can’t compete.

Our Facebook buddy “Hamtramck Bars” is hosting Dyngus Day here in town. The plan is simple: eat Polish food, and then spend the rest of the day drinking at local bars.

Dyngus Day goes way back in Polish history, and it includes boys whacking at girls’ legs with Pussy Willows. We swear we’re not making this up.

So, it you see a wild-eyed group of guys armed with Pussy Willows, well, just laugh out loud.

And keeping the Polish theme going, we were tickled to receive an update from our friends the Polish Muslims.

The big news first: The group is being honored with a “Distinguished Lifetime Achievement” award from the Detroit Music Awards organization on April 15 at the Fillmore. We’ve lost track how long the group has been delighting all of us, but as Dave Uchalik from the group points out, “I don’t know how distinguished we are but we have been doing this for a lifetime.”

Before that big award show, you can catch the Polish Muslims perform on Fox 2 News on Wednesday, April 13 sometime between 7 and 9:30 a.m.

And … there’s more. Today, April 8, is opening day for the Detroit Tigers, and for the second year in a row The Polish Muslims will perform at Nemo’s Bar in Corktown (1384 Michigan Ave.), starting right after the game ends, which is about 6:30 p.m.

The bar puts up a huge heated tent outside and hundreds of happy, drunk Tigers fans stop by to keep the party going.

Are you a fan of vinyl records?

Toast certainly is, because there is nothing like slapping down a record on a record player and turning the volume up. Digital, MP3, Ipod … it’s all electronic throw-away crap. Heck, while we’re at it, let’s bring back mono!

So, in keeping with spring celebrations popping up like so many wildflowers (and yes, Pussy Willows), April 16 is Record Store Day. Here in town we have two outstanding record stores, Record Graveyard on Caniff and Detroit Threads on Jos. Campau near Trowbridge.

Over at Record Graveyard, owner Jeff Garbus will be spinning records from noon to 5 p.m. on Hamtramck’s own 1610 AM radio station. The store is also selling used vinyl at half – yes, half – off.

At Detroit Threads, our buddy Mikel Smith is on the game. He’s got DJ’s coming in all day to spin discs. It sounds like too much fun.

Can you believe all this is happening in just the month of April? Something tells us that this spring and summer is gonna be a party like no other.

One Response to Toast of the town …