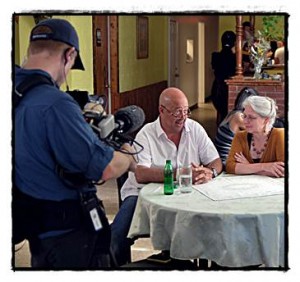 If there is one thing that unites Hamtramckans, it’s our stomachs. No, we’re not talking about throwing down beers and shots. It’s all about the crazy good grub you can get in this town.

And this hasn’t gone unnoticed among media types.

Hamtramck has been in the lens of a number of cable TV foodies in the past. Anthony Bourdain of “No Reservations” was at Polonia Restaurant a couple of years back.

On Wednesday, Andrew Zimmern of “Bizarre Foods,” which is on the Travel channel, came to sample some of the ethnic foods this town dishes up. Normally, Andrew is noshing on some pretty weird things, like brain tacos (we’re not sure if it was human or some kind of animal brain) or bull penis soup.

I suppose compared to the rest of the world, Hamtramck looks pretty normal, which would usually be a fairly hysterical thing to suggest to the locals.

Accompanying Andrew was Mayor Karen Majewski who served as a tour guide and ambassador. Quite frankly we can’t think of a better person to represent our fair city.

They started at Café 1923, which serves some of the best coffee in the area along with a whole bunch of other coffee-related drinks. Then it was off for a taste of the Middle East at Sheeba’s, Polish offerings at Srodek’s, pizza and ghost peppers at Amar Pizza and a last stop at the newly-opened Palma Restaurant.

Palma serves specialties from Bosnia and is next to our office here on Caniff. Folks, for a mere six bucks, you can get one huge dish of chicken and a Coke. 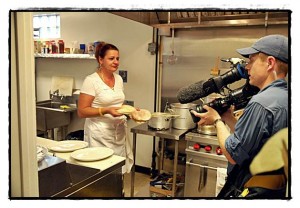 From what we have heard, the show will air sometime in February. As the broadcast date gets closer, we’ll give you a heads-up.

In the meantime, go out and explore Hamtramck’s eateries. There’s a whole wide world here in town waiting to be eaten.