Toast of The Town … 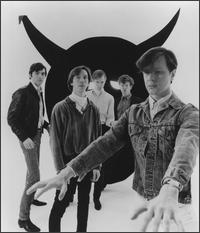 How about a little garage for that New Dodge?

Garage rock, that is.

This Saturday night, there’ll be a garage hodge-podge here in Hamtown at the New Dodge Lounge, with venerable Queens N.Y. headliners The Fleshtones, backed by The Sights and Almost Free.

On Thursday, November 4, the venue will feature Pittsburgh rockers The Cynics. Other acts on the bill that night include The Sights (yes, again), Detroit’s legendary Rocket 455 and the Pow Wows.

Callwood, who had been handling these same duties at the Belmont Bar before its sale (and conversion to a sports bar), says The Sights were instrumental in wanting to bring The Cynics back to Detroit. That gig is a Get Hip and No Fun Records co-production.

Callwood calls her own booking company Stiv DeVille Productions. Veterans of the punk scene from over the last few decades should get both references.

The Fleshtones have toured here often since they formed in 1976. They last played at the Majestic Café some months back in 2010, and have played the Lager House in recent years as well. Tickets for their show are $15. It’s likely to be crowded.

It’s been a bit longer for The Cynics, if memory serves. (Note: Sometimes, memory does not serve.) The Pow Wows are considered up ‘n’ comers, and Rocket 455 and The Sights are well established on the local garage rock scene, so the bill promises to be an exceptional one.

One other show of note that’s solidly booked at the New Dodge is a Halloween bash on Sat., Oct. 29, Callwood said. The 3-D Invisibles will headline, along with the Casket Bastards (featuring members of the Amino Acids). Co-sponsored by Maria’s Comida, Detroit Threads and Showtime, the evening will also feature a “Dress as your favorite old horror movie character” costume contest.

On Sat., Nov. 26 there will be a Hamtown Hoedown. Details, including music acts, to follow. The event will celebrate all things alt-country and roots rock, with a local flavor.

Callwood also mentioned her husband Brett’s book signing on Sat., Oct. 1, also at the New Dodge (8850 Jos. Campau). The book, titled “The Stooges: Head On, A Journey Through the Michigan Underground,” was just published on Sept. 2, according to the website Punknews.org.

Also on the bill for that night is Hamtramck’s own Bootsey X & the Lovemasters, as well as Amy Gore and Her Valentines. Admission is $5 for those 21 years and older and 10 bucks for those 18 to 20 years old.
(Brett Callwood also works for the Metro Times. His book was published by Wayne State University Press.)

2 Responses to Toast of The Town …