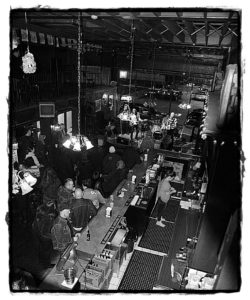 By Charles Sercombe
It’s been a few years since we last talked with Cathy Gordon over at New Dodge Lounge.
The former city councilmember reminded us recently that she has the distinct title of owning a bar in Hamtramck for the longest continuous time.
She’s right.
Lili’s 21 Club is long gone – although new owners took over the bar and renamed it Painted Lady.
Hippo’s is gone. Jean’s is gone. Paycheck’s closed and is now called Sanctuary.
Head Coach closed for a while, moved and now has apparently reopened.
The Norwalk closed up many years ago and is no longer operating as a bar.
Hamtramck’s only blues bar, the Attic, shut down, got remodeled and reopened several times under new names. Word is it might open as a bar again soon.
Suzy over at Suzy’s Bar has not been operating as long as New Dodge. Neither has Whiskey in the Jar been in business as long as Gordon has.
The last time we talked with Gordon was to inquire as to whether the bar was for sale. It was, and it still is.
Last we heard, the asking price was around $400,000 – which included both the building and liquor license.
New Dodge, located on Jos. Campau just south of Holbrook, is a perfect joint for live bands.
It’s the only bar in town that has an open upstairs from where you can watch a band perform down below.
It’s a New York-style bar – long and narrow, and nice and dark.
We recently caught some friends playing in there, and we were reminded how great the sound level is – not too loud, not too soft. A perfect balance, and no doubt the layout of the place adds to the good acoustics.
Whoever comes along and buys the bar next will only have to open the door and turn on the lights.
You’ll be ready to go. And Cathy and her husband, Lew, can finally retire.
After owning and operating a bar for 34 years, Gordon said it’s long past time to move on.
“As you get older, you run out of steam,” she said. “We’d like to retire.”
When it isn’t hosting bands, the bar still has a reputation for serving up a tasty burger.
But, as you might guess, there’s been a sea change in the local bar scene in recent years.
There were over 100 bars operating in town when she first opened in 1985. At least that’s what she figures.
There are just a dozen or so now.
Which has resulted in a lot fewer folks going out.
“I wish the town was how it used to be,” she said. “There was a lot more foot traffic.”
Gordon’s advice to would-be bar owners?
“Be sure you’re a strong person. You also have to be creative,” Gordon said, “I’ve had so many changes in my bar – food-wise, entertainment-wise.”
It also helps to be one of the most hospitable bar owners too. Anyone who spends Paczki Day standing on top of her bar and pouring “Jezzy” (aka “Stupid Juice”) down the throats of waiting customers is all right in our book!

Record Store Day
Once again, Hamtramck was represented in the recent nationwide celebration of independently-owned record stores.
Detroit Threads had a day-long swarm of vinyl lovers passing in and out. There was also a steady rotation of DJs, as well as special sales and barbecued hotdogs waiting for the hungry shoppers.
It made that Saturday a much livelier scene on Jos. Campau. Thanks again to store owner Mikel Smith for hosting the party.
When it comes to good food and great times, Hamtramck has plenty to offer. In this column, we talk about what’s happening at our bars, restaurants and at other events throughout the city.