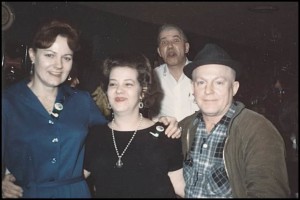 By Charles Sercombe
Sometimes here at Toast of the Town we go on a trip down memory lane instead of a night on the town.
We recently heard about one such trip from former resident Ed Martin, who now lives in Florida.
He sent us a photo of his uncle, Stanley Malenko, hanging out at the Port Bar. That’s where Ed would also drop by back in the 1970s.
The Port Bar was originally located at the southwest corner of Jos. Campau and Holbrook, which is now a parking lot for the Hamtramck Town Center strip mall.
The bar moved up Campau a block or two, but it’s not terribly clear if it is still open. Toast of the Town remembers stopping in at the Port back in the 1980s when Hamtramck cops would stop by after their shifts and shoot the breeze.
For a cub reporter, it was a goldmine for information and great story telling. You don’t get that kind of camaraderie much anymore, which in a small way has made Hamtramck less fun.
Today, everyone is tightlipped for fear they’ll get fired. How’s that for progress?
Included with Ed’s email was a photo of his uncle and the Port owners, Al and Mimi Kent. Isn’t Mimi a great name?
Ed has an interesting tale to tell, and we’ll let him tell it:
“Al was an officer under Patton during WWII and met Mimi in Vienna, Austria. They married, moved to Hamtramck and opened the Port Bar. Al and Mimi lived on Holbrook between Jos. Campau and Gallagher and had one son, Joseph, who eventually moved to California.
“Al died following a fall down the steps of their upper flat on Holbrook and Mimi a few years later. The bar was sold and the building demolished for what is now a parking lot.
“A new owner bought the license and moved the bar to its present location on the east side of Jos. Campau near the intersection of Florian St. He was a Greek fellow whose name slips me now. …
“When he decided to return to Greece the bar was sold and a few years later resold to the present owner who is Albanian.”
OK, it’s a small story, but if you read it close, it’s packed with information. Al was in World War II and served under legendary Army General George Patton, who was idolized by his troops.
It’s amazing that Al was allowed to marry a Viennese woman during the service because it was generally frowned upon for servicemen, and officers, to marry overseas. But it is estimated some 50,000 men during World War II did just that despite the obstacles.
Can you imagine moving from Vienna to Hamtramck? Looking at the photo they look like a happy couple.
Al must have only been in his 50s when he died so tragically, and what a way to go, falling down a flight of stairs. One can imagine Mimi being heartbroken, and it’s no wonder she died just a few years later.
On a lighter note, I bet there were many laughs and much music at their little bar.
And by the looks of it the fun continued with the new owner, whoever that “Greek fellow” was.
Hamtramck still has a bar owner from Greece. Well sort of. George Cvetanovski is the owner of 7 Brothers Bar, which we last highlighted back in 2012 when George was celebrating his 80th birthday.
He’s still going strong, and still looks much younger than he is. George is from Macedonia – OK, a little north of Greece – where he worked as an actor. It’s no accident that his bar has long been a watering hole for local actors.
All along the walls are framed “headshots” of dozens and dozens of actors, some of whom have gone on to national fame.
Whether you’re an actor or not, though, it’s like family at this little bar.
Here’s what we had to say about the place a few years ago:
“The jukebox blared as per usual, and folks tried to squeeze in a game of darts amid the crowd. The many, many actor headshot photos that line the wall here seem to stare down in approval at the melee below. …
“Cvetanovski’s bar is an old-time watering hole. Although there are grills, no food is cooked here. Even tonight, the food comes from Jet’s Pizza and elsewhere. But there are the aforementioned darts, and there is pool, and there is above all that outstanding jukebox.”
Poles, Greeks, Macedonians, Albanians … there are so many ethnic groups who have made Hamtramck their home and provided so much nightlife entertainment.
Stop by 7 Brothers some night and catch a little of that old – and new — Hamtramck.