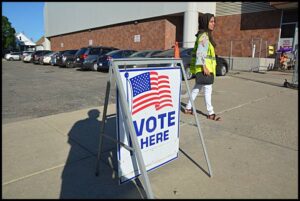 Voter turnout was low for Tuesday’s primary election, but that’s typical for primaries, especially when there no local offices or local proposals on the ballot. Hamtramck’s State Rep. Abraham Aiyash was re-elected, thanks to a sizeable number of Hamtramck votes.

By Charles Sercombe
State Rep. Abraham Aiyash of Hamtramck has easily cruised to a second term.
And that’s thanks to Hamtramck voters who gave him a huge boost with 1,440 votes. He also had a sluggish district-wide voter turnout to thank.
He won in his newly-drawn district, which included the Grosse Pointes, with 4,348 votes, which came to 61 percent of the total vote cast.
Aiyash was endorsed by the Detroit Free Press, but not by the Detroit News.
Aiyash’s victory guarantees that he will be voted into office in the November General Election, since his district votes heavily in favor of Democrats.
Two other Hamtramck candidates weren’t so fortunate. In fact, they both mysteriously disappeared from the Hamtramck ballot. Sam Alasri and Hamtramck City Councilmember Mohammed Alsomiri were eliminated from the ballot as candidates for Wayne County Commissioner in the 3rd district.
That’s the seat that Martha Scott has long held, and she was seeking re-election.
Alsomiri told The Review that he believes “someone was behind this.” He added that he suspects it was a politician.
He is correct.
On Wednesday the matter was cleared up by the Wayne County Election Clerk’s Office.
An employee for Scott, Robert Davis, challenged their qualifications to be on the ballot because they had both failed to fully fill out their affidavits of identity to qualify for office.
They were removed from the ballot on May 9 by Wayne County Circuit Court Chief Judge Timothy Kenny.
Armani Asad was also a Scott challenger, but he lost his bid to unseat her – as expected, considering that Scott has been long-entrenched in her position.
In the past few years, Scott has brought in hundreds of thousands of dollars from the county to improve Veterans Park and the historic baseball stadium.
In other election results, predictably, Hamtramck voters rejected a county ballot proposal to extend a millage for funding county jails by 61 percent. It’s become routine, in recent years, for Hamtramck voters to say “no” to both existing millages and new ones.
But Wayne County voters supported the millage, so Hamtramck property owners will have to continue paying it.
State Senator Adam Hollier, whose old district included Hamtramck, also lost his bid to go to congress in a newly-drawn congressional district. He decided not to seek re-election in the state senate, and chose instead to run in a newly-drawn congressional district that also includes part of Warren.
Entrepreneur and State Rep. Shri Thanedar won that seat. He spent what appeared to be a lot of money for television and online ads.
Perennial local candidate MD R. Alam, who has also been active in Hamtramck elections, lost his bid to unseat Warren Evans as Wayne County Executive.
Tuesday’s primary election was brutal for candidates and their campaign workers, with a blistering sun and temperatures in the mid-80s.
Some 2,122 Hamtramck voters participated, about 16 percent of the over-13,000 registered voters in Hamtramck.
The number of voters who went to the polls to cast their ballot in person was 1,009, and the number who voted via absentee ballot was 1,113.
Election results for Wayne County slowly trickled in throughout the hours after polls closed, and most results were not posted until Wednesday morning, even into the afternoon.
In the governor’s race, Gretchen Whitmer ran unopposed on the Democratic side, and she will face off with Republican challenger Tudor Dixon, who was endorsed by former President Donald Trump, in November.
Here are the unofficial results:

One Response to Tuesday’s election results; only one Hamtramck candidate wins