War on Ukraine: A personal perspective 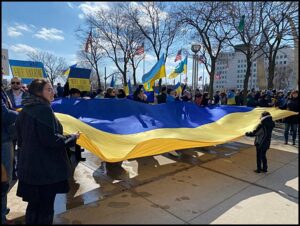 On Sunday, a rally was held in Detroit’s Hart Plaza in support of Ukraine. Photo by Bohdan Pryjma

By Ksenia Rychtycka
Missiles are raining down on golden-domed Kyiv and across Ukraine. Air sirens are going off.
An oil depot burns and flames rise to the sky. Ukrainians are huddled in metro stop bomb shelters.
Women are giving birth here too.
Orphanages, buses and apartment buildings are struck indiscriminately.
Scores of innocent people, including children, have been killed.
My family in Kyiv huddles in their apartment, and we can hear a loud boom in the distance as we talk to them in a video call. Their faces are ashen, and they have aged in the space of a few days.
My 79-year-old mother-in-law tells us that she never imagined living through something like this. When we end the call, she speaks as though it may be for the last time. Another friend and her family flee the capital and sit in their car for hours, trying to get to safety.
The Ukrainian Armed Forces is repelling Russian troops on its own for days now, fighting for Ukraine’s very survival. Ordinary citizens are joining the fight to protect their land.
A beer factory suspends normal operation and starts producing Molotov cocktails to thwart the invading Russian troops. A woman sees Russian soldiers standing in the street in her village and confronts them.
“Why are you here?” she demands. When they tell her to move on, she gives them sunflower seeds to put in their pockets so that when they die on her land, at least something will grow.
The United States offers to evacuate the president of Ukraine. He responds by saying: “I need ammunition — not a lift. The battle is here and that’s where I stay.”
These are just some of the images out of Ukraine after Russian President Vladimir Putin decided to bring a brutal war to an independent country with a history going back over a thousand years. A war which started with Russia’s illegal annexation of Crimea in 2014. This was followed by Russian-led occupation in the Donbas region.
Ukraine is a peaceful country which has embraced democracy and wants nothing to do with his dictator regime.
I was born in Chicago and raised in Hamtramck where I attended a Ukrainian Catholic school, a Saturday Ukrainian Studies school, and was a member of a Ukrainian scouting organization. I grew up speaking Ukrainian, the language that was repressed during Soviet times.
My grandparents and parents fled Ukraine at the close of World War 2. They would have gladly stayed in an independent Ukraine, but the Eastern European countries had no choice when after Nazi occupation, the whole of Ukraine was incorporated into the Soviet Union.
In 1932-33, millions of Ukrainians starved to death in Stalin’s artificial famine when they resisted his collectivization policies. It was a genocide on the Ukrainian people.
In 1991, Ukraine declared its independence. My grandparents and father never got the chance to see that, but my mother did.
In July 1990, I first visited Ukraine with her and my brother. I had been raised to love my ancestral homeland and was finally able to set foot on the ground my family fled. It felt like my life had come full circle, and I moved there in 1996, living and working in Kyiv for a few years.
Ukrainians are resilient and courageous. They will continue to fight. It is heartbreaking to see the horrors currently being inflicted on Ukraine while battling Putin’s invaders on their own.
Sanctions, military equipment, humanitarian and other assistance have been provided but Ukraine still fights on its own.
Things are changing fast in Ukraine, but as I write this, another genocide is being inflicted on the Ukrainian people due to the madness of another dictator.
If you’d like to help Ukraine, please visit: https://www.uacrisisresponse.org/donate
(Ksenia Rychtycka is a Warren-based writer, author and poet.)
Posted Feb. 28, 2022

4 Responses to War on Ukraine: A personal perspective