What to watch for in election 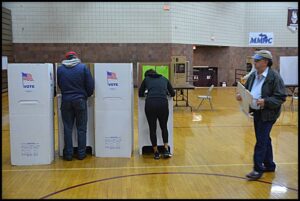 By Charles Sercombe
With the Aug. 2 Primary Election just around the corner, the race for the 13th Congressional District is heating up.
The 13th District includes Hamtramck.
According to a recent poll conducted by Target Insyght of Lansing, Shri Thanedar is leading the pack of candidates by 22 percent. He is currently serving as a state representative.
Also seeking this open seat is state Sen. Adam Hollier, whose district includes Hamtramck. Hollier opted not to seek re-election to the state senate.
He is polling in third place (16 percent) with Portia Roberson in second (17 percent).
In a campaign statement released by the Roberson team, they are confident she can come out as the winner.
“It’s clear from Target Insyght’s poll released this week, Portia Roberson is the only candidate in the field that can beat self-funded millionaire, Shri Thanedar in the 13th District. Portia has surged to second in a race with 16% of voters undecided, despite no outside spending on her behalf,” Roberson’s team said.
A few months ago, former Detroit City Councilmember Sharon McPhail was polling in the top spot, but this latest poll shows her far behind at 7 percent – the same percentage point shared with John Conyers, the son of famous Congressman John Conyers, who died in 2019.
Apparently in this election, name recognition is not a factor – even one as familiar as is Conyers’.
The poll was conducted among 500 Democratic voters who are likely to vote in the primary election.
Ed Sarpolus, who owns Target Insyght, said he did not do polling for the state representative for the 9th District. Hamtramck’s own Abraham Aiyash is seeking re-election in this newly redrawn district.
Aiyash told The Review that he is running his campaign “as if I’m 20 points behind.”
Interestingly, Aiyash has one opponent who is also named Abraham, but with the distinctly different last name of Shaw.
Is challenger Abraham Shaw trying to sabotage Aiyash by confusing voters?
Sarpolus told The Review that, indeed, “sometimes they do that.”
Election polls open at 7 a.m. and close at 8 p.m. Early voting is now possible at city hall, and it’s not too late to apply for an absentee ballot.
Remember, too, Hamtramck had to move 600 voters who had been in Precinct 4 over to Precinct 5 – which means they now have a new building at which to go vote: the Senior Plaza on Holbrook.
Those voters were notified a few months ago of the change. Also new this election, the city is offering ballots in the Arabic language.
Posted July 29, 2022

One Response to What to watch for in election