With a new coach, Cosmos finally have something to celebrate 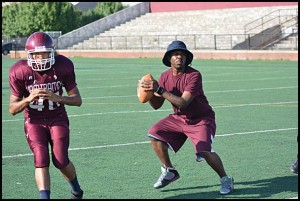 First-year Cosmos Football Head Coach Donny Scott (right) is shown here running his team through drills. For years the Cosmos failed to win a game – until this year.

Special to The Review
The Hamtramck High Cosmos varsity football team fell one game short of getting into the state playoffs this year but rookie head football coach Donny Scott is not complaining.
Far from it.
Hired to coach the team after last year’s abysmal 0-9 season, Scott and the Cosmos wound up with a 4-5 record after Friday’s 58-38 trouncing of Harper Woods High, a game in which quarterback and wide receiver Daqquan Kendle rang up a total of 451 yards to help the Cosmos win the Battle of the Maroon Helmet.
Finishing off the season by taking the helmet home after leaving it in Harper Woods for the past 15 years was a special delight for Scott, who described the season-ending game as the biggest rivalry on the Cosmos schedule.
“We finally got it back,” said Scott.
Although the team fell a bit short of Scott’s early-season prognostication of a 7-2 season, Scott was pleased with both his team’s overall performance and the support he said he received all season from school officials and Cosmos football fans.
Scott told the Hamtramck Review early on in the season that he hoped Hamtramck would transform itself into a football city wherein fans would drop everything on Friday nights to fill the stands.
“The fans came out and supported us, especially for the homecoming game,” Scott said. “It was just what I wanted and I think it’s only going to get better.”
Scott has his reasons for predicting a better season next year. He said he has a team with playoff potential.
Kendle will be returning as senior captain next season after his phenomenal game on Friday, when he threw two touchdown passes, had 257 yards passing, and ran for 57 yards as quarterback. Playing wide receiver, Kendle caught two touchdown passes.
Four Cosmos players won First Team All –Metro honors this year, including running back D’Angelo Santroy, who racked up 314 yards rushing on Friday and threw three touchdown passes while playing quarterback.
Kicker Hajic Mujic, running back Masaii Ray, and tight end Troy Adkisson have also been picked by Metro-Conference coaches for the All-Metro team.
And while Scott focused on constructing a team this year, much of that work is done. The Cosmos, with nine players returning on each side of the ball, can fall into more of a rehearsal mode when they regroup for practice in February, according to Scott.
For years now the Cosmos have failed to win even one game in their season, until Scott took over this year. Left tackle Josh Gubin credited Scott for the turnaround by focusing the team on the basics.
“When I played last year I didn’t learn anything,” Gubin said. “I actually like football now. It’s like family.”
And Scott was no ordinary coach, Gubin said.
“He treats us like he’s our dad,” he said.
In the off season, Scott is requiring that his players either wrestle or run track in order to keep in shape.
“I believe in all my players playing two sports,” Scott said.