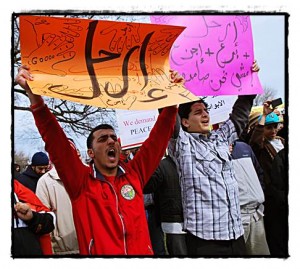 Libya may be getting all the media attention lately because of U.S. attacks on the government, but there is another Arab country also undergoing a revolt.

And the Yemeni community in Hamtramck and the metro area want the world to know that people in their homeland are fighting for freedom. On Saturday, about 200 Yemeni-Americans, mostly men and boys, gathered at Veterans Memorial Park to protest the Yemeni government and demand the ouster of that country’s leader, President Ali Abdullah Saleh.

“We need change in Yemen,” said Mansour Algahain of Oliver St., “If we don’t get it, we will keep going every week.”

So far, the Yemeni government has been brutal in cracking down on protestors. In one incident alone, Yemeni police opened fire and killed 31 people, according to press reports.

At Saturday’s rally, a number of those attending waived Yemeni national flags as well as American flags. They also held signs with photos of those beaten and killed during protests.

Others held signs with writing in Arabic and English. Some said:

“How many peaceful protestors need to die?”

“Hey Ali, Yemenis say, how many people have you killed today.”

“The people united will never be defeated”

Speaker after speaker grabbed the microphone to talk to the crowd. Most of the speeches were conducted in Arabic, but one speaker said in English: “We Yemenis cannot stand idly by.” He went on to also say: “We demand nothing more than their basic rights.”

Unlike the case with Libya, the American government has not moved to help the protestors. That’s because, according to analysts quoted in media reports, the Yemeni government has allowed the U.S. to bombard suspected Al Qaeda camps located inside the country.

The terrorist network has infiltrated parts of Yemen. American officials also fear that if the Yemeni government falls, the country could ignite into civil war or become a home to terrorists.