Yes, there is a light at the end of the road 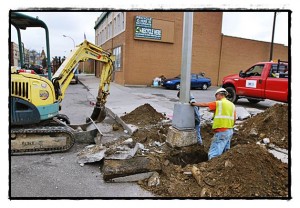 New streetlights are being installed along Jos. Campau and Caniff, which should put an end to entire blocks blacking out when one light goes bad.

The project to replace the street lamps on Hamtramck’s major thoroughfares is nearing its end.

Allow us to illuminate.

DPW head Steve Shaya, reached by phone, said that about 60 units in all are being replaced, mostly along Jos. Campau and Caniff. DTE, through a sub-contractor, is handling the actual work, which involves swapping out the old units for the new “high-pressure sodium” lighting.

“It provides a better glare,” Shaya said, “as well as more coverage,” meaning that the light diffuses over a larger area of the ground. “It should result in about $20,000 to $25,000 in savings per year.”

Another positive of the new system is that the old series circuits are now in parallel, which in layman’s terms means that now, just because one bulb in one street lamp fails, it doesn’t mean that a whole row of lights goes out; each one is separate entity unto itself.

The remaining work should be done very soon, probably within a couple of weeks, if not less.

You may notice that the new lights now cast a glow that could be described as more yellow to orange to pink.

The old white lights actually contained mercury. Part of the deal is that DTE hauls them away, so that the city doesn’t have to mess with them. The new ones are also more energy efficient, as you might expect. Hence, the savings. 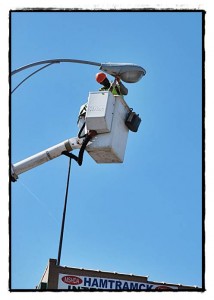