American Axle has no immediate plan to continue demolition 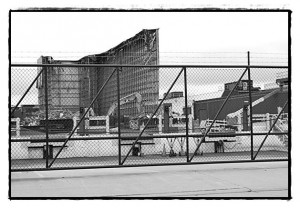 American Axle & Manufacturing is demolishing part of its sprawling plant, but that doesn’t mean more will be demolished, a company official said.

The part coming down is known as the “Stack Building,” a seven-story structure that once housed parts.

Chris Son, Director of Investor, Corporate Communication and Marketing, said the building is being demolished only because it is now “obsolete.”

“This is a one-off situation,” he said.

About three-quarters of the building was on the Hamtramck side of the Detroit border, said Fire Chief Steve Paruk. That little detail could have major ramifications later if production ever returns to the plant.

Hamtramck once reaped about $1 million a year in income and property taxes from the plant when it was operating. Since the plant closed down two years ago, Hamtramck’s tax revenue from the plant sharply decreased.

There is hope from some city officials that sooner or later American Axle will ramp up production.

Chris Son said there could be a possibility that manufacturing will one day return.

“The market is the boss,” he said.

GM and Chrysler were the company’s main customers, Son said. While the auto industry has bounced back in the last year, Son said “it’s too early to tell” when the plant would reopen.

Son added that there has been no decision to permanently close the plant, as some city officials have feared.

However, Jason Friedmann, the Director of Community & Economic Development for Hamtramck, said American Axle has been selling off plants on the Detroit side of the border, south of Holbrook.

He said high-tech firms have bought some of the plants. Friedmann said he had no further information on what kind of products will be produced by the companies.

American Axle took over the plants from GM in 1994.