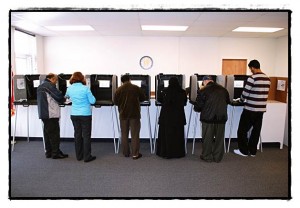 This election season just took a turn for the unexpected.

Kendzierski said it was just time to leave. She had been a city employee for 20 years.

Gitschlag is a former deputy clerk in Brownstown Twp. and was an election clerk in Macomb County. He also has been a bartender at Hamtramck’s Whiskey in The Jar (which is owned by City Councilmember Tom Jankowski).

State election officials are also now in the office helping out.

In other election news, if you received an absentee ballot, throw it out. There were some errors in the ballot and new ones are being printed. Those who received ballots will be mailed a new one in a week or so.

Council candidate Beverly Tran not only wants to be elected, she wants to beat the city in court. Tran had accused the retiring city clerk of public malfeasance for not allowing her to see a nominating petition of a candidate.

The clerk initially refused the request in the belief that it was not open for public review but later allowed Tran to see the petition.

Tran, a legislative aide for Congressman John Conyers, is also suing the city’s Board of Elections, which includes City Attorney James Allen, for violating the state’s Open Meeting Act and Michigan election law.

Tran had requested copies of the board’s minutes, but was told by the city attorney that there are none.

Acting City Manager Kyle Tertzag said he had no comment on the lawsuit, but did say the city will have to hire an outside attorney because the city attorney is named in the suit.