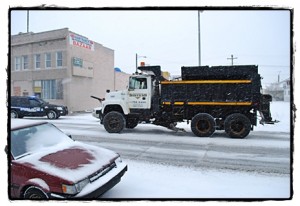 Charles Sercombe
City officials rushed to change their snow plowing service on Monday evening before Tuesday’s expected snowstorm hit town.
As it turned out, the rush to fire its current contractor, Independent Services Group, and hire the second lowest bidder, Platinum Landscaping, was for nothing.
The owner of Independent Services pointed out to city officials on Tuesday after being informed his company was fired that the city’s contract requires a 10-day notification before the termination takes effect.
Regardless, the move to fire the company raises more questions than answers.
Such as, why fire the company in the first place?
There had been a few complaints about the company’s performance raised by Councilmember Cathie Gordon and acknowledged by DPW Superintendent Martin Ladd. Ladd said the company had missed salting a few streets earlier in the season.
But he said that when the company was called and informed about the streets, the company promptly took care of the issue.
Independence Service owner Mike Miodowski told The Review that the problems were minor and that his company did what it was required to do. He declined further comment on his company being fired, but pointed out that the company the city hired in his place dissolved as a corporation in 2007.
The City Council, except for Shahab Ahmed who was absent at Monday’s special meeting, unanimously agreed to fire Independent Services and instead hired the next lowest bidder, Platinum Landscaping.
Platinum performed snow plowing service and street salting prior to this year. According to state corporation records, the West Bloomfield company did indeed dissolve as a corporation in 2007.
Councilmembers Gordon, Mohammed Hassan and Kazi Miah justified their support for firing Independent as a public safety issue.
“You can’t put a price on public safety,” Miah said.
And just what is that price?
Platinum’s bid for the service was much higher than the amount that Independent was charging.
Independent was charging $7,530 each time for salting and plowing streets.
Platinum will charge $11,875 for the same service.
This new cost will result in an additional expense of tens of thousands of dollars to the city if the area is hit with more snowstorms.
As for Platinum no longer being incorporated with the state, City Manager Bill Cooper said he will have to investigate whether that violates a city or state requirement. He also stressed that he cannot overturn the council’s decision to switch contractors.
Steve Shaya, who was previously connected with Platinum, was also at Monday’s meeting. Shaya is a former DPW superintendent for Hamtramck and ran for city council in last year’s election season.
He has also served on the city’s Recycling Commission. Shaya told The Review that he is an employee of Platinum.
And as for Independent’s performance during Tuesday’s and Wednesday’s snowstorm, both Cooper and Ladd had nothing but praise.
“They performed admirably,” Ladd said.