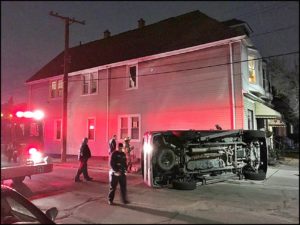 A recent accident at Gallagher and Edwin underscores the need to “calm” down our streets to end speeding.

By Walter Wasacz
I was sitting in a chair writing and listening to music when I heard a crash and a shake in the wall facing the street.
Through an upstairs window I saw a car on the opposite curb with its front smashed in. At my side window I looked down to see a utility truck on its side, pressed against the house.
Outside I found a crowd already gathering at my corner, that’s Edwin and Gallagher, with police, fire and emergency medical vehicles arriving within minutes of the accident. The driver of the SUV was sitting on the sidewalk, his back to the wall of my house, talking on a phone.
The other driver was calmly explaining to people, including an EMT tech, that he didn’t need medical attention. Both men appeared to be OK, but their vehicles were wrecked and not drivable.
The truck had apparently flipped while traveling northbound on Gallagher. The other car had been heading westbound on Edwin and edged out into the path of the SUV.
Whether that driver blew through the stop sign is unknown. The rate of the truck’s speed and other exact details are also unknown. There were no apparent eye witnesses, none that I could find.
But excessive speed and carelessness are fair guesses as factors in a senseless crash like this. It appeared the SUV hit my house with the tip of its bumper, luckily just scraping some siding and trim. The foundation appears secure, only minimal damage was done.
Both vehicles were towed. Police stayed on the scene for about 45 minutes then left. Firefighters hosed splattered oil and various small pieces of debris off the street. Just over an hour after the crash the cleanup was so thorough it was as if it never happened.
All departments and agencies worked together impressively. I tip my hat to them.
But now a question: how do we, as a community, take positive action to calm the streets and make them safer for everyone?
Including people in their own homes, like I was, comfortably settled in after 11 on a late December night?
Let’s think hard on this.
Houses being hit by motor vehicle crashes constitutes a crisis of bad road behavior that needs, at the very least, persuadable modification. Drivers must be hyper-aware of their environment as they travel through Hamtramck. We need to help them with this awareness.
The city is densely populated with residential and commercial properties only a few feet from the sidewalk and street. Striking them at any rate of speed is unacceptable. Direct hits at high rates of speed can cause catastrophic damage and serious injury or death.
We need productive dialogue between residents, the city, the schools, whose students — the most vulnerable members of our community — must dodge motor traffic impeding their right of way in crosswalks like the one in front of my house, the scene of this accident.
Or put it this way: what is needed is a total buy-in by every community member to insist that the streets be calm and safe. Period.
Who can disagree?
It’s unfortunate to personalize it this way, but it should get everyone’s attention when the author of a column about calming the city’s streets becomes part of a crash story while minding his own business in his own house. A writer cannot invent irony so rich as that.
The good news is that public spectacles even on a microscopic neighborhood level have the potential to get public attention and positive reaction, some of it by officials that can do something about it.
In November I met with the Hamtramck Board of Education and the schools superintendent Tom Niczay. I left the meeting believing all get the urgency of the message: slowing down the streets is a top priority to maintain the safety of the local student population and its families.
Earlier this week I met with City Manager Kathy Angerer, Police Chief Anne Moise and Rodney Johnson from the department of public services.

We talked about traffic calming ideas that work in other communities, focusing first on increased speed limit signage, reflecting tape on stop signs and repainting crosswalks to make them more visible for approaching motorists.
We also discussed finding ways to communicate a common-sense message: that it will take a community-wide effort to create slower, safer streets, and that it is only possible if we do it together.
On the back end of safety is the side benefit of increased walkability and economic development.
We have a good start, with more meetings and actions planned, boots already on the ground. I’ll update as projects, however small, move forward in the year ahead.
Walter Wasacz is a Hamtramck native who writes about walkable discovery for the Review.