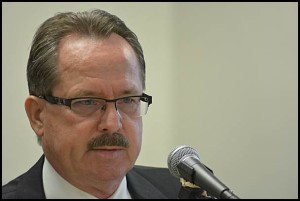 D. Wayne O’Neal is the former City Manager of Eastpointe.

City officials got a chance to weigh in on who should be the next city manager.

But instead of focusing on the two candidates, they set their sights on Emergency Manager Cathy Square.

City Councilmember Anam Miah complained that Square did not release the candidates’ resumes until right before last Monday’s meeting instead of well before the meeting.

Mayor Karen Majewski complained that Square has not said what role the council will play – if any – in selecting a city manager.

“We’ve heard nothing,” she said.

After the meeting Square asked the council to let her know which of the two candidates that they preferred.

The council and mayor were given a list of seven questions that they had to stick to.

First up was the former city manager of Eastpointe, D. Wayne O’Neal, who has been involved in government work for over 30 years.

O’Neal said he is no stranger to Hamtramck, having grown up in Detroit, just outside of the city. He said he is sympathetic to Hamtramck’s current financial crisis because many cities are facing the same strains from a drop in property values, less state revenue sharing and unfunded mandates.

His management style, he said, is to let the department heads run their departments, but he doesn’t shy away from firing those who don’t perform. O’Neal said his many years in city and county government have made him a “hardened and seasoned city manager.”

As for his immediate goal, if he got the job, it would be to stabilize the city’s finances and to make sure it will remain stable for the next five years.

“I look at finances as being the number one problem right now,” O’Neal said.

He also addressed one of the pet peeves that city officials have expressed over the last several years. City officials have long complained that they do not get information from the administration in timely basis.

O’Neal said it’s his practice to give weekly updates. 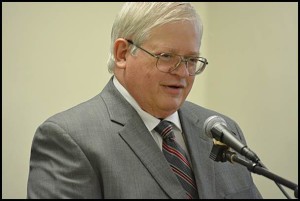 Steven Aynes is the former City Manager of Ecorse.

Next up was Steven Aynes, who also has worked in city government for a number of years, and had last been city manager for Ecorse.

Aynes said Hamtramck is at a “crossroads,” and needs to take stock of its infrastructure to get a clear picture of the city’s needs.

One thing Hamtramck has to also look at, he said, is figuring out what services can be shared with other communities.

One of his first priorities would be to talk with local officials to find out their views and concerns.

She said a majority of the council said they prefer O’Neal.

As for the backtalk from councilmembers, Square said the comments were “vicious and totally tasteless.”

“One of the things this town has to learn is how to treat people,” Square added. “You can’t just say anything.”