City mulls over what to do about its ambulance service 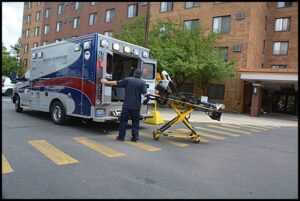 There has been growing concern over the city’s ambulance service. A number of residents say they have had to wait a long time before an ambulance arrives.

By Charles Sercombe
Some residents are complaining that the city’s contractor for ambulance service, Rapid Response, is neither rapid nor responsive.
In one of the more dramatic instances recently, a Hamtramck High School student had a seizure in class, but after 25 minutes, or so, and an ambulance still had not arrived.
By that time the student’s parents arrived at the school and drove their child to a hospital.
At a recent city council meeting, HHS teacher George Hloros and several students spoke about the incident, and their concerns.
“While that is troubling enough of an experience,” Hloros said, of watching what his student was going through, “what was most traumatizing for us all was what happened next.”
And that was watching “the clock tick by minute-after-minute” and no ambulance arriving.
Later, he found out that the reason for the delay was that the city has only one ambulance on duty.
“This was such a shocking and unacceptable fact that it is beyond belief …” he said.
A student echoed his sentiment: “We need to ensure no lives are lost.”
In the case of the school incident, the city’s sole ambulance was tied up on another run.
As it turned out, the city’s ambulance contractor supplies only one on-duty ambulance during what are considered non-peak hours.
The city has had a bit of a tortured history with ambulance service. At one time, the Hamtramck Fire Department operated that service.
But, several years ago, the department’s one-and-only ambulance died on a run, and police officers had to transport a person waiting for help to the hospital.
That incident prompted city officials to look into a less expensive ambulance service – while possibly improving upon it. The thinking was, by contracting out the service, the city would save money on both fire department staffing and the purchase and maintenance of a city-owned ambulance.
Initially, the city’s contractors provided the service at no cost to the city. The companies thought they could collect insurance money from the people they service.
Turns out, though, a number of residents have no insurance.
The result was, the ambulance contractors were not earning money. Ambulance companies came and went.
A few years ago, the city’s current ambulance company demanded — and got– $140,000 a year for their service.
Former City Manager Kathy Angerer was in talks with the Hamtramck firefighters’ union about possibly bringing back service to the fire department.
And then she left to take another job, and the matter has since, apparently, gone nowhere.
But even if the city were to return local service to the fire department, that comes with a price tag too, and that could possibly be more expensive than contracting it out.
Once you total up the cost of ambulance personnel and the cost and maintenance of an ambulance, it could all greatly exceed the $140,000 price the city currently pays.
The cost of a new ambulance alone is at least $200,000 – more or less.
And firefighters’ union president Andrew Oleksiak conceded, on a recent Facebook page dedicated to Hamtramck, that it would take time to order and receive a new ambulance.
“If we ordered a new ambulance tomorrow, it could take up to two years to get because of demand and supply shortages,” Oleksiak said.
Also, he said, there’s a shortage of personnel.
“There’s a massive firefighter/EMT/paramedic shortage in Michigan,” he said.
As for the city eliminating ambulance service through the fire department, Oleksiak has another take on that.
“The fire department provided amazing service, but the city administration wanted to play political games with it and now this is the result,” Oleksiak said.
If the city were to go back to providing its own ambulance service, there’s still the matter of what happens when the city’s ambulance is on a call and another call comes in?
Would that require the city to pay to have a private company on standby, just in case?
Or would the city also purchase a second ambulance and hire more trained personnel to be on hand?
The cost of that could be staggering, and the city is currently in deficient spending.
As of now, the city is talking with its contractor to provide a second ambulance during non-peak hours.
In the meantime, Mayor Amer Ghalib has suggested hiring a specialist to help the city sort through this issue.
Posted Nov. 18, 2022