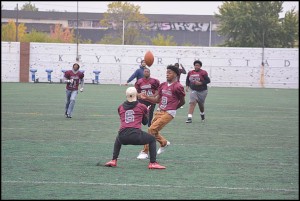 The Cosmos football team practices on Thursday for Friday’s big game. If the Cosmos win tonight’s game, they will qualify for state playoffs.

By Charles Sercombe
The Hamtramck High School varsity football team is poised to achieve a first in the school’s long and legendary sports history.
“We’re on the verge of making history,” said HHS Athletic Director Martin Kirby.
If the Cosmos win tonight’s game (Friday, Oct. 13), the team will qualify for the state playoffs.
Kirby said the team has never qualified for that honor. The team was one game short of a win last year to qualify. So far, the Cosmos have a 5-2 record, and once again need just one more win to head to the state playoffs.
“All season long the team has used the mottos ‘Make History’ and ‘Why not us?’” Kirby said. “This hardworking group of student-athletes have worked very hard to make history happen.”
The high school sports teams – which included football, baseball, basketball, tennis and wrestling – were once powerhouses in the area during the 1920s through the 1960s.
During football season decades ago the business district would close down for home games on Friday afternoons and fans would stream into Keyworth Stadium.
The historical stadium recently received huge improvements and media attention after the Detroit City Football Club – a semi-pro soccer team, soon to become a full-fledge pro team – made it their new home.
Tonight’s game starts at 7 p.m. in Keyworth Stadium. Admission is $5 for adults and $4 for students. The Cosmos will play against Harper Woods.
As they say in Hamtramck: “Go Cosmos!”