Council election is coming up 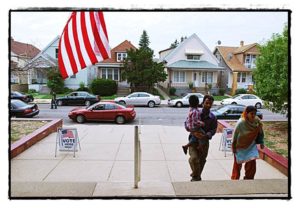 Next Tuesday, Nov. 5, is election day in Hamtramck. File photo

By Charles Sercombe
Hamtramck voters will be heading to the polls next Tuesday (Nov. 5).
The only item on the ballot is the race for city council. Six candidates are lined up. The top three vote-getters will serve a four-year term, starting on Jan. 1.
So far, it’s been an almost non-existent election season, with barely a peep coming from candidates.
Even two candidate forums failed to generate much interest. The first one, held before the August primary election, attracted only three candidates.
The same turnout resulted at another forum last week, with candidates Carrie Beth Lasley, Robert Zwolak (a former councilmember and former city clerk) and Nayeem Choudhury the only ones to show up.
Candidates Mohammed Hassan (a former councilmember), Mohammed Alsomiri (the highest vote-getter in the August primary) and council incumbent Saad Almasmari were no-shows.
Candidates not participating in these forums is nothing new. It’s a trend that started several years ago. Why a candidate would pass up an opportunity to meet with voters is not entirely clear, although there is plenty of speculation.
The reasons range from candidates just not being serious, or for some of the immigrant candidates, being self-conscious about not speaking English well, or instead, focusing on their own ethnic communities, and lately, concentrating on absentee ballots.
On Facebook, Mayor Karen Majewski suggested that some candidates’ focus on absentee ballots lead to illegal tactics – such as offering voters money for their support.
“It’s common knowledge. Ask residents of the Col. Hamtramck Homes what price they’ve been offered for their blank ballots,” Majewski said on the Facebook page called “I love Hamtramck.
“There is horse trading going on, and if some candidates aren’t showing up for public forums, my educated guess is it’s because they’ve already counted up their absentees and see no need to address the general public.”
It should be noted that the mayor does not offer proof of this practice. However, in the recent past there have been candidates and residents convicted of illegal handling of AV ballots.
If absentee ballots are an issue of concern, there is no sign yet that there is a significant effort going on to address the issue.
City Clerk August Gitschlag said there have been 1,400 AV ballots mailed out. So far, as of Thursday when The Review went to press, about 700 have been returned.
Since the council race is the only item on the ballot, voter turnout is expected to be low.
Voting absentee has become easier for Michigan voters. You no longer need a reason to ask for an AV ballot, since state election law has been changed.
And you can also register and vote on election day – another change in the election law.
As long as you are at least 18 years old, a U.S. citizen and prove that you have lived in Hamtramck for at least 30 days, you can register next Tuesday and vote on the same day for the Hamtramck election.
You can also vote this Saturday in city hall from 8 a.m. to 4 p.m.
Nov. 1, 2019

5 Responses to Council election is coming up