Councilman backs down from pay raise 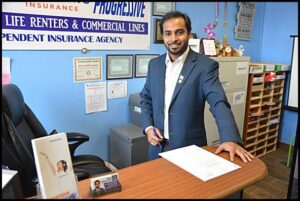 By Charles Sercombe
City Councilmember Nayeem Choudhury is starting the second year of his new four-year term, and he’s looking for a raise in pay.
Or he was at least during last weekend. It gets complicated.
Currently, councilmembers, who are not considered on the job full-time, earn 2 percent of the governor’s salary. That comes out to $3,180. The governor earns $159,300 a year.
The mayor gets 4 percent of the governor’s salary, which comes to $6,360 a year.
Choudhury wants – er, wanted — to double his salary, although he originally wanted to quadruple his council pay to 10 percent of the governor’s salary – a whopping 400 percent pay raise.
He backed down on that original resolution after an immediate public backlash – telling the Free Press that he had made a mistake. He planned to reduce his salary hike to 4 percent of the governor’s salary, a 100 percent increase.
That would have boosted his salary to $6,360 a year.
Choudhury’s generosity also extended to the mayor pro tem position, proposing that salary go up to 12 percent of the governor’s salary ($19,080) and to the mayor, to 15 percent ($23,850).
At Tuesday’s council meeting, Choudhury withdrew his proposal, citing that the city’s continuing deteriorating financial situation.
At the meeting, Choudhury defended his proposal, saying that councilmembers who care about the community put in a lot of hours dealing with the public. He said that if the salary increases are ever made, each councilmember should then have their own city hall office, and put in a number of hours there each day.
Office space in city hall is pretty much tied up for various departments, so it’s not clear where his proposed offices would have been located.
Choudhury, an insurance agent, also told the Free Press that he had no idea, when he ran for office that the job as councilmember would require so much work. He also said that providing higher salaries would attract better-qualified candidates.
The Review reached out to Choudhury for comment, but he did not return the call.
Reaction on social media was not so kind to his proposal.
On the Facebook page called “I love Hamtramck and Actually Live Here,” Andi Sarah said: “I’ve never seen such a bunch of clowns in my life. Pay decrease would suit much better. Talk about audacious and absurd.”
On the same Facebook page, Rachel Renee Srodek said:
“They knew what the pay was when running for council, it’s not about the money, you do it because you want to better the community. If you’re in it for the money you’re in the wrong position.”
Had the proposal been passed by the council, it still would have had to face approval by voters. The earliest that could have happened would have been this coming May.
Posted Jan. 29, 2021

3 Responses to Councilman backs down from pay raise