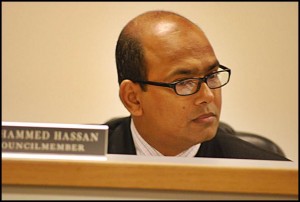 City Councilmember Mohammed Hassan must come up with $3,000 to avoid being prosecuted for falsely saying he did not owe any fines or fees for past campaign-related issues.

By Charles Sercombe
City Councilmember Mohammed Hassan’s campaign to become a State Representative has run into potential trouble.
According to campaign records from the Wayne County Elections Division, Hassan owes the county $3,000 in fines and fees from his run for the seat in 2012.
According to an affidavit he submitted on April 22 to enter the race, Hassan signed off from owing any fees or fines. If it is determined that he perjured himself, he could be charged with a felony. If he is found guilty he can be fined $1,000 and imprisoned for five years.
Hassan did not return a call for comment.
Fred Woodhams, a spokesman for the Secretary of State, the state department that overlooks elections, told The Review that Hassan will be sent a letter to settle up with what he owes or face possible criminal prosecution.
Hassan is among several Democratic Party candidates challenging incumbent Rose Mary Robinson for the Representative race for the 4th district.
Isaac Robinson, her son and campaign manager, had no comment on Hassan, but stressed: “Rep. Robinson’s focus remains on constituent services and defending the rights of local residents in Lansing.”
Isaac Robinson added: “It will be interesting to see if election officials certify his (Hassan’s) candidacy if he is in violation of Michigan campaign finance law.”
Hassan’s fines and fees stem from his failure to submit campaign expense reports for his run for the state representative seat in 2012. In a review of his file in the County Election Division, a letter addressed to Hassan’s address at 2425 Neibel St. was returned, saying it was undeliverable.
This isn’t the first time that Hassan’s debts have raised questions.
Several months ago, his status as a councilmember came into question when it came to light that he fell behind on paying his water bills. According to the city, Hassan owed $758. He entered a payment plan, but failed to live up to that agreement. The city eventually turned off his water service.
According to the city charter, any elected official who is in default to the city or any other government agency can be kicked out of office.
Hamtramck City Attorney John Clark determined that despite the outstanding water bills, Hassan was not a “defaulter.”
Hassan’s residence on Neibel is owned by Omar Nakash, who is also the owner of Platinum Landscaping.
Platinum Landscaping is contracted by the city to snow plow a selected number of city streets, clean and maintain city lots and cut down trees. Nakash also fell behind in paying property taxes on the house Hassan lists as his residence and faced foreclosure with the county.
He owed the county $6,613 as of last October. Platinum was paid $1.8 million by Hamtramck for its services from 2009 to mid 2012.