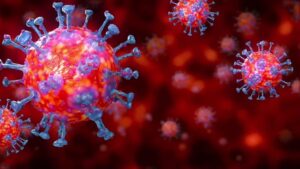 By Charles Sercombe
One of Mayor Karen Majewski’s last actions she took before leaving office was to give one more update on the Covid outbreak in Hamtramck.
And once again, it was not good news. Majewski, whose term ended Dec. 31, put it this way on her update on Dec. 27:
“I have difficult news this morning.”
On Dec. 27, the city had 66 new cases and four new deaths, although the deaths likely happened weeks ago, but it takes time for county health authorities to get their records up to date.
At the time of her update, there had been 3,606 cases during the past two years here in Hamtramck, with a total of 62 deaths.
As of this past Monday, the county had recorded a whopping 164 new cases in town, bringing the total number to 3,770 (no, that is not a typo). There was also one more death recorded, changing that total to 63.
Omicron folks — it’s spreading like wildfire and, according to the county, the majority of the cases are affecting people 29 and younger.
Local hospitals are also at capacity with Covid patients.
Majewski said that the Centers for Disease Control and Prevention (CDC) is now recommending that we all step up our masking game, and use the KN-95 or N-95 surgical masks.
Those blue cloth ones?
“They are basically decoration,” Majewski said, in reference to a CDC finding.
But you can use the cloth ones over a surgical mask for that extra protection.
Free vaccinations and boosters are still available in town. The easiest place to go is city hall where medical clinic is set up on the first floor.
That clinic is open Monday-Saturday, from noon to 7 p.m.
Vaccinations are even available now for kids 5 to 11 years old.
The former mayor also reminded residents that it’s the unvaccinated who make up the majority of people coming down with Covid.
“The vaccination is your surest defense against Covid,” Majewski said. For those not vaxxed, she said, “It’s not a matter of if you’ll get Covid, but a matter of when.”
She noted, too, that the unvaccinated who came down with Covid in the past can still get it again and again.
Majewski also went through her usual updates on the city’s lead water lines, financial help available due to Covid and various food pantries operating in the area.
Majewski reminded the public that there is a good chance that federal money will be coming to the city to pay for the replacement of lead water lines.
That became an issue several weeks ago when the city found out that six houses that were sampled for lead content in drinking water came back with slightly high lead levels, which caused a bit of a panic among some residents.
The city has replaced over 400 lead lines in recent years. It’s estimated that it will cost over $50 million to replace the remaining lines in the city.
“Hopefully, help is on the way,” Majewski said.
Majewski wound up her last update, which she had already been doing for two years when Hamtramck recorded its first Covid case, with a simple message.
“It’s been a rocky ride taken together,” she said. “All I can say is, sharing this difficult path with you brings us together as a community, and helps solidify our commitment to each other.:
And she noted that, while her role is changing what is not is “my concern for you.”
The response on the city’s Facebook page to her last address to the city prompted responses by many residents.
Karen Ploshinski, who runs a Facebook page about Hamtramck, had this to say:
“Thank you, Mayor Majewski, these Monday mornings with you, were informative to all of us. Your information and consistency brought comfort during these last, almost two years of the pandemic.”
Mayor Amer Ghalib said, on his Mayor Amer Ghalib Facebook page, that he will continue the weekly reports but did not immediately know what day of the week he will do it.
He also said he will change the format.
“I’ll post some of the most updated CDC covid-19 recommendations in this post. If we follow those guidelines, our community will be safer and healthier,” Ghalib said.
“This is what matters the most, not the number of cases, because it’s not accurate since many people refuse to get tested these days unless they are very sick, with some exceptions.”
Posted Jan. 7, 2022