Detroit breakdown: Inside the firestorm 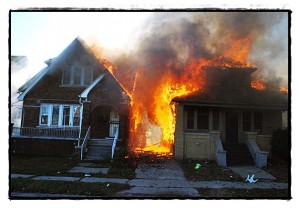 On Tuesday (Sept. 7) Detroit went up in smoke.

But the real destruction wasn’t from the multiple cases of conflagration – residents were flaming mad at the mismanagement of the firestorm by the Fire Department and their own mistreatment by the Detroit Police.

I know this because I myself witnessed the destruction, devastation and chaos firsthand. Of the six major fires that ravished Detroit’s eastside, one occurred in my neighborhood.

It began as a tiny fire in a garage across the street from my house, about four doors down. I was working outside talking with my neighbor when we began to notice the smell of fire. As we looked around for the source, we noticed a slight plume of smoke coming from the back of a single-family house occupied by a family of four.

We ran to the house to make sure that everyone was out of it, and then discovered a small fire in the eaves of the garage in the back yard. By this time – approximately 5:30 p.m. – several residents had already called 911.

After that I ran back to my house to grab a fire extinguisher to put out the blaze. However, when I got back to the garage it was obvious at that point it would not be possible to contain it with the equipment at hand. I then returned to my house to get a camera and document the scene.

The scene that I captured was one that would only get worse. The fire that had begun a mere 10 minutes prior had been carried by the wind and was rapidly spreading out of control. Flames jumped from the garage to the house and were quickly climbing the exterior wall to the roof. Instead of looking upon the site with curiosity and excitement, residents now experienced alarm and fear.

But the fire also ignited bravery and cooperation. As some residents went door-to-door to help evacuate the houses nearby, others grabbed hoses to try and contain the blaze. When it was apparent that the houses would not be reached by the fire department in time to save them, neighbors did what they could to help each other get their most treasured possessions out of their houses.

All the while, sirens could be heard in the distance. Several times it seemed as though they were approaching the area, but the sound would gradually wane away. It was something that was puzzling to everyone, as many had themselves called 911. In fact, 911 received so many phone calls that operators became temperamental with callers. One woman said that she called 911 and the person who answered hung up on her.

When the first truck arrived at the scene – about an hour after the fire was initially reported – the firefighters were unable to do anything because they lacked the necessary equipment. Faced with broken hydrants (including one directly in front of the initial fire) and absent a tanker truck for water supply, they were forced to burn a crucial five minutes back-laying hose to the nearest working hydrant (a block and a half away) until they could act. But one thing they did do was tell residents to continue to remain in the area to help contain the blaze by any means possible.

Unfortunately, at that time the Detroit Police showed up. While many would assume that the presence of police officers would be a good thing, it was anything but. Despite the request of assistance that came from the firefighters, the police officers immediately ordered residents to move across the street and away from the fire.

This order agitated many of the residents. As we pleaded with officers to let us help out in any way we could, they impolitely told us to “Get the f— back” or they would arrest us. When we explained to them that we were asked to help, they continued to berate us. After my brother threw up his arms in exasperation at the situation, saying “Just don’t let my house burn down, please,” the officer in charge of the situation mockingly pulled out his radio and condescendingly mimicked my brothers’ request.

For the next few hours, we stood idly by as we watched the neighborhood burn. So short-staffed were the firefighters on scene that at several times residents had to point out fires that had ignited in the area due to flaming debris. As the roof of my own garage burned, my brother and I repeatedly alerted police and firefighters, only to be ignored. We weren’t concerned so much with the garage itself as we were of the fact that the firestorm had started with a similar small garage fire. And although we were more than ready to put it out again (along with a neighbor, a fire extinguisher and a bucket of flour we had already done so once), it took 45 minutes for anything to be done.

Finally, when the police officers on the scene apparently got bored with antagonizing and threatening the residents of the neighborhood, they got in their cars and left. Fires were still burning and trucks were still on the scene, but their desire to remain seemed to have been extinguished. It was only at this time that we could fully grasp the destruction that the fire had caused.

Three houses across the street were completely destroyed, and a fourth was damaged enough to warrant the Red Cross to provide vouchers to its occupants. At least six garages also burned down. On the other side of the street, one vacant house was torched, as was my next-door neighbor’s. Behind my house on the next street over, one house and four garages were destroyed.

In the end, the only things that many residents were left with were questions. How was a small fire allowed to grow into such a towering inferno? Why did it take over an hour for firefighters to arrive on the scene? And who was in charge of this debacle?

If the blame falls on the shoulders of the man at the top, then Detroit Mayor Dave Bing has some serious explaining to do. But after reading his spokesman Dan Lijana’s quote in Wednesday’s (Sept. 8) Free Press that “We had every available company and firefighter out there […] we chose to do the right thing in regards to public safety and ask for help from our surrounding communities,” it leaves me with one big question: Why wasn’t Hamtramck’s Fire Department called to help when it was a mere five minutes away from the scene of the blaze?

Did someone fiddle as Detroit burned? It looks like the next firestorm will be one of criticism.

(Writer’s note: This article is in no way an indictment of the firefighters who risked their lives and limbs. As a former firefighter, I fully understand the dangers involved in putting out a fire and commend those who braved the flames to contain the blaze. However, that same training and experience does lead me to question the use of the National Incident Management System, which was implemented by Homeland Security after the 9/11 attacks in order to better coordinate emergency efforts.)