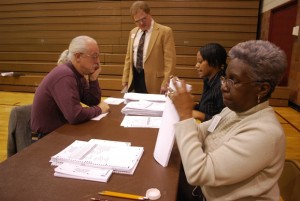 By Charles Sercombe
Hamtramck’s November election appears to be finally over and counted.
Last week’s recount of the mayoral and city council election yielded few changes. In the mayoral recount, both candidates, Mayor Karen Majewski and her challenger Abdul Algazali, each gained a vote.
That means Algazali still lost by 123 votes.
Algazali called for the recount, claiming there was error and fraud. He has said he will reimburse the city for the cost of the recount – estimated to be about $2,500 for the mayor’s recount – if he still comes up the loser.
He did not return calls to comment on the recount and whether he still plans to reimburse the city.
Council candidate Anam Miah asked for the council recount. His vote total did not change. A few votes shifted here and there among other council candidates, but the outcome of the election essentially remains the same. Miah finished 127 votes behind third-place winner Mohammed Hassan.
During the recount, a representative for Algazali made numerous ballot challenges to the point where county election workers threatened to call the police and have him removed. Also acting as a challenger was Bill Meyer who made several ballot challenges.
The challenges were not pursued.
City Clerk Ed Norris said there were a variety of reasons why some ballots changed. In one case, a voter voted for both Algazali and filled the circle for a write-in candidate even though there were no write-in candidates.
Norris said the recount at least “validated” the city’s ballot counting machines.
Mayor Karen Majewski had criticized Algazali for demanding a recount and called it a waste of time and money.