Era of the negro baseball leagues celebrated in new exhibit 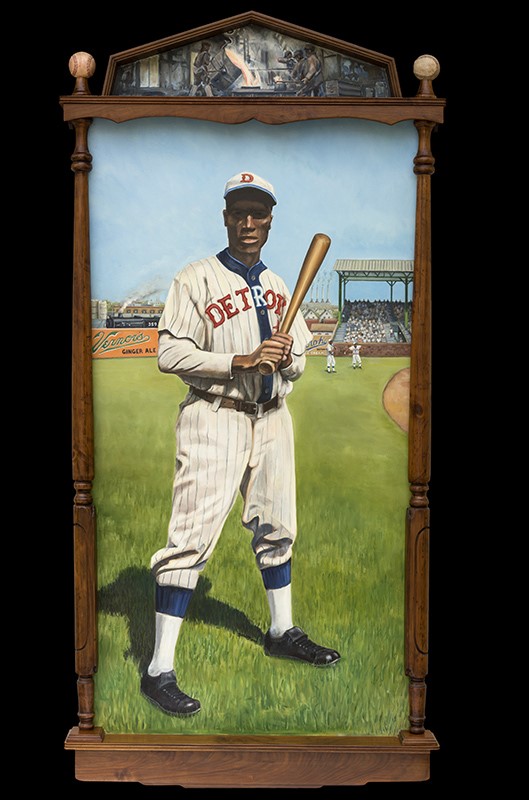 By Charles Sercombe
A new exhibit highlighting the negro baseball leagues opens tomorrow (June 15) at the Detroit Historical Society.
Friends of Historic Hamtramck Stadium and the Black Historic Sites Committee are hosting the display.
This is what the Friends organization had to say about the event:
“’The Negro Leagues and Detroit Stars’ exhibit marks the 100th anniversary of the founding of the Detroit Stars and showcases the remarkable saga of Detroit’s Black Baseball history, including the Stars and their Hall of Fame outfielder Norman ‘Turkey’ Stearnes.
“Negro League teams and their legendary players will be featured in rich, graphic display panels, including a life-size painting of Turkey Stearnes by acclaimed Negro Leagues artist Phil Dewey.
“Upon entering the gallery, visitors will also see a display dedicated to the history of Women in Black Baseball. The exhibit will also include artifacts, memorabilia and a historic timeline of Black Baseball in Detroit.
“An opening reception at the Detroit Historical Museum in the Allesee Gallery of Culture, complete with hot dogs and refreshments, will take place on Saturday, June 15 from noon to 3 p.m.
“Later in the day at 6:10 p.m., the Detroit Tigers will host the Cleveland Indians at Comerica Park, making this the perfect tailgate-style pregame party.
“The reception kicks off with opening remarks from members of the Black Historic Sites Committee, Turkey Stearnes’ daughters Joyce Stearnes Thompson and Rosilyn Stearnes Brown, and Friends of Historic Hamtramck Stadium founder Gary Gillette.
“Before Jackie Robinson broke the color barrier in 1947, so-called ‘organized baseball’ was a segregated sport that banned African Americans. During this era of discrimination, major-league baseball stadiums were often off limits to Negro League teams.
“Locally, the Detroit Stars played at Mack Park on the city’s east side from 1919 to 1929, before moving in 1930 to Hamtramck Stadium, one of the last remaining major Negro League ballparks in America today.
“Inspired by the 100th anniversary of the Detroit Stars, this fascinating new exhibit represents the cornerstone of activities organized by the BHSC in 2019 to educate the public about the history of Black baseball in Detroit.
“So far this year we’ve co-hosted bus tours of historic Black baseball sites and an ongoing Negro League film series. A custom designed T-shirt commemorating the Detroit Stars will be available for sale during the reception, designed by the BHSC to raise funds for its programs.
“An affinity group of the Detroit Historical Society, the Black Historic Sites Committee was formed in 1971 by then Detroit City Councilman Ernest Browne. Since its inception, the BHSC has remained dedicated to discovering and exploring historic sites around Detroit that recognize the significant people and events of the city’s African American community.”

The Detroit Historical Museum is located at 5401 Woodward Ave.