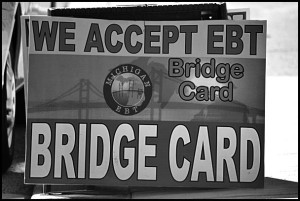 Many markets in Hamtramck accept Bridge cards, but apparently some are not playing by the rules.

By Charles Sercombe
On Tuesday, federal investigators raided and later charged six Hamtramck markets, all Bengali-owned, with food stamp fraud.
Raids were also conducted at other markets in Warren and Detroit. In total, authorities say the markets defrauded the government of $12.5 million during the time the investigation was held.
A spokesman for the government could not be reached by the time The Review went to press on Thursday. However, the U.S. Attorney’s Office issued a press release on Tuesday, but it contained few details.
The U.S. Attorney for the Detroit office, Barbara McQuade, said in the press release:
“Taxpayers in Michigan fund food stamp programs to provide food for the needy, not to create a commodity to be traded for profit. We hope today’s charges will deter other merchants to ensure that food assistance programs are not abused.”
Here is how the scam worked: Market owners or employees would offer to give back cash to customers through their Bridge cards or other food stamp cards, but at a cost. The stores would also charge a fee on the card for themselves.
In some instances, authorities said, that surcharge was as much as what customers received. For example, a customer might ask for $50 in cash, but the store would then charge an additional $50 to the customer’s card and keep that amount for themselves.
Federal investigators, which included immigration officials, were joined by state agencies in the investigation. It was not made known how long the investigation lasted.
The following markets and individuals were charged Tuesday afternoon in federal court:
Al Amin Supermarket, 11920 Conant, owner Moklasur Mukul, age 36, of Hamtramck.
Bengal American Grocery, 9800 Jos. Campau, manager Mohamed Ali, age 38, resident of Detroit.
Deshi Bazar, 12045 Conant, owners Ali Ahmed, age 31, and Nazir Ahmed, age 32, and employee Mustak Ahmed, age 34, all residents of Detroit.
Maloncho Greens House, 12133 Conant, owner Azizur Ullah, age 37, of Hamtramck, and employees Mohammed Chadek, age 44, Mohammed Miah, age 38, and Mohammed Amin, age 38, residents of Hamtramck.
New Al-Madeena Grocery, 2220-2222 Caniff, owner Dilshad Chowdhury, age 34, resident of Hamtramck.
Pay-Less Foods, 11350 Jos. Campau, owner Mohamed Ahmed, age 58, resident of Hamtramck.
According to media reports, each of those charged posted a $10,000 bond.
Here is what is not known and what we would like investigators to answer:
What were the individuals charged with and what are the penalties?
How did they become aware of the scam?
Since all of the markets charged are Bengali-owned, was the Bengali community solely the focus of this investigation? Or was this just a coincidence?
There were several other markets raided in Hamtramck, does that mean more charges are coming?
Will the Bridge card holders who participated in the scam also face charges and/or get kicked off the program?
What does the immigration aspect of the investigation mean? Will some of those charged, or others, face deportation if they are not citizens?
According to our sources, food stamp fraud has been Hamtramck’s worst kept secret. In fact, sources say, it gets more involved. There are many households where people use several aliases to collect benefits.
In other instances there are households claiming false dependents.
News of Tuesday’s busts drew immediate outrage in the comment sections of various media outlets. Many commentators assumed those charged were Arab-Americans, based on their names.
In Hamtramck, the raids were the buzz of the town.
Al Pronko, the owner of a small business located next to one of the markets raided, said he long suspected there was fraud being committed.
“I know they were doing it,” Pronko said. “People would line up out of the store and come out with nothing.”
Not only that, he said, the market had hardly any food items in stock. Pronko said seeing the scam day-after-day made him mad.
“It upsets me we have to subsidize people from other countries who abuse the system,” he said.
Pronko said he welcomed the raids but says the government “needs to do a lot more.”
“It was bittersweet what happened yesterday,” Pronko added.
In the government’s press release, there was plenty of tough talk, and a hint of things to come.
“This investigation and prosecution should send a strong zero-tolerance message to those individuals engaged in the practice of defrauding taxpayer funded WIC and SNAP programs,” said Anthony Mohatt, Special Agent-in-Charge, USDA-Office of Inspector General.
“It should also serve as a warning to all stores, that participate in the WIC and SNAP programs as vendors, that fraud and trafficking (purchasing those benefits for cash) will be vigorously investigated and prosecuted by the USDA-OIG, the U.S. Attorney’s Office, and all its federal, state, and local partners that have a stake in ensuring that fraud is eliminated from taxpayer-funded programs.”