Firefighters worry Pontiac is their fate 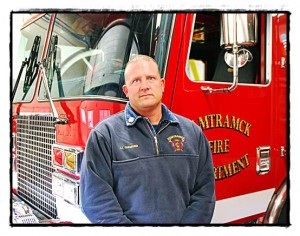 Lt. William Diamond said firefighters are concerned about what will happen to their department if a state-appointed emergency financial manager takes over Detroit or Highland Park.

As Pontiac firefighters marked the last day of the Pontiac Fire Department on Wednesday, Hamtramck firefighters had mixed feelings.

Actually, there seems to be confusion among firefighters over who to blame for the department’s closing: Pontiac Emergency Financial Manager Lou Schimmel or firefighters with Waterford Township, or Pontiac firefighters themselves?

Let’s back up a bit.

A few weeks ago, Pontiac firefighters voted in favor of combining their department with Waterford in order save their jobs.

By all accounts, it was an emotional vote and a decision that wasn’t made easy. One firefighter was quoted in the media saying it was like having a gun put to their head: Agree to the deal or risk losing their jobs.

Waterford firefighters also said they were told to accept the deal or that they, too, would be folded in with another city.

On Wednesday, Pontiac’s Fire Department was no more. Forty two Pontiac firefighters were hired on by Waterford.

In Hamtramck, the events that happened just 30 miles north did not go unnoticed. The firefighters posted several comments and news links on their Facebook site.

Some in the department criticized Waterford firefighters for forcing the issue.

Lt. William Diamond, the president of Hamtramck Firefighters’ union, Local 750, said it was about “one local (union) taking over another.”

Pontiac EFM Lou Schimmel, who was once Hamtramck’s EFM, said he needed to close the department in order to save $3 million. Pontiac faces a multi-million dollar budget deficit.

Diamond said he fears what’s to come if an EFM were to be appointed to Detroit or Highland Park.

“Hamtramck as an entity would be gone,” Diamond said. “The state could make Hamtramck a neighborhood of Detroit. It’s not a good thing for unions in the state.”

Hamtramck firefighters have plenty of reason to be worried.

City officials are projecting a $3.4 million budget deficit by next June. The solutions to balance the budget are questionable at best.

But so far, there is talk of proposing to take over police and fire services in Highland Park.

Diamond said his union members are open to that, but it has to be “on our terms.”

Well, two weeks ago we asked Highland Park Mayor DeAndre Windom what he thought of the proposal.

He rejected the idea of Hamtramck’s Police Department taking over patrols because it is a mostly white force that would be patrolling in a mostly African-American city.

However, Windom said he is open to discussing fire protection services.

Diamond has another suggestion.

He wants city officials to ask voters to approve a special tax millage dedicated to supporting police and fire services.

Ah, but that comes at a steep price. Public safety eats up about $8 million in the city’s budget. Each additional mill placed on the property tax would generate $200,000, said Finance Director Nevrus Nazarko.

At $8 million, it would require voters to approve an extra 40 mills. That increase is not something property owners could afford. Instead, it will take a drastic overhaul of union contracts, said Finance Director Nevrus Nazarko.

One Response to Firefighters worry Pontiac is their fate