For African-Americans, it’s been a long road to city council 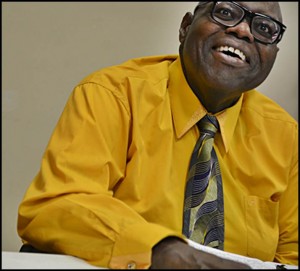 Newly-elected Hamtramck City Councilmember Titus Walters is only the third African-American elected to that office. He said the historical significance of that achievement hasn’t “sunk in yet.”

It’s been 91 years since the last African-American (Dr. James Henderson) was elected to the city council. That changed last Tuesday when Titus Walters became the third.

Technically, the first African-American (Ordine Toliver) to serve on council was back in 1920 when Hamtramck was not yet incorporated as a city and instead was a village.

Henderson served on the very first council (1922-1924) when Hamtramck officially became a city.

The only other African-American to serve on council was William Hood, about eight years ago when he was appointed to the position to fill a vacancy. Hood actually was a runner-up in a 2007 election that qualified him to fill the position.

The black community has historically comprised about 13 percent of Hamtramck’s total population, but only a handful attempted to seek public office over the decades.

Walters also holds another historical milestone. He is currently the president of the Hamtramck School Board. He has been a school boardmember for nine years and has one more year left in his current term.

The historical significance isn’t lost on Walters, but the 50-year-old downplays the role of race.

“I never look at color, but I know the importance of it,” he said.

Walters said he prefers to look at the bigger picture when it comes to holding public office.

“You have to be a leader for the whole community,” Walters said, adding that the full impact of the election hasn’t “sunk in yet.”

For many years blacks in the community have complained, sometimes bitterly, about their lack of representation. Darla Swint, who was the only other black candidate to run in the August primary, said Walters’ election has been a long time in coming.

“The representation is what we are looking forward to, that he’ll be a strong voice for us” Swint said.

As for what this means in Hamtramck’s long history of politics, Greg Kowalski, the Chairman of Hamtramck’s Historical Commission, said “Walters picks up a tradition with deep roots.”

“African-Americans have a long – and often overlooked – history with Hamtramck. They played a key role in the creation of modern Hamtramck and have been a vital element of the city ever since.  And they contribute to the great diversity of the city,” Kowalski said.

As for his immediate concerns, Walters said he will be meeting with seniors to better understand their needs, and he will continue to mentor young African-American males.

Walters said that with the threat of violence and high incarceration rate of young black males, they have become “an endangered species.”

One way to serve the needs of young black males and seniors, Walters said, might be a program to pair them up, perhaps having the youths help with household chores.

“I don’t think our seniors are looked at enough,” Walters said. “Too many old folks are by themselves.”

One Response to For African-Americans, it’s been a long road to city council