For this WWII vet, Pearl Harbor Day has a special meaning 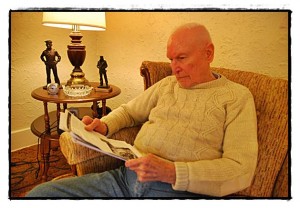 Frank Stock looks at newspaper clippings about his World War II experiences. He survived not only the war, but also the attack on Peal Harbor.

“I’m the last of the Mohicans.”

Yes, Frank Stock is indeed one of the last of his kind. Come next Wednesday, Dec. 7, which is Pearl Harbor Day, Stock can once again look back at that historical day with wonder that he survived.

Back then, on Dec. 7 in Hawaii, the Japanese performed a perfect sneak attack on America’s main naval base. It lead to our nation’s entry into World War II – a day President Roosevelt called “a date which will live in infamy.”

Stock just turned 90 years old on Thanksgiving Day. He was 19 years old when he was assigned to the USS Vestal, a repair ship that was moored next to the USS Arizona.

Sometime around 8 a.m. Japanese planes attacked the ships docked in Pearl Harbor. The Arizona is perhaps the most well-known of the ships to have been destroyed that day.

Stock was on a boat heading to shore with several other sailors to attend a Mass. It was a Sunday morning, after all.

As they were heading to shore, Japanese tailgunners began strafing the area with bullets. At first, Stock said, he and others thought it was just another Navy exercise.

“But these planes came from the wrong direction,” Stock said from his Whalen St. house.

It became all too real when a sailor next to him was hit in the stomach. He would later die from his wounds.

But before we go on, let’s talk of the Frank Stock of today.

Stock is still a picture of health and vitality. His complexion is good, his hair is white although now thinning a bit. He walks with just the slightest stoop, and his mind is sharp with details of his war experience. He lives with his wife, Camille, in the house her parents used to own.

This Wednesday’s commemoration of the Pearl Harbor attack is special, since this is the 70th anniversary. At one time there were over 18,000 survivors. It’s now estimated there are only about 3,000.

Most are pushing 90 and most are being pushed around in wheel chairs. When this reporter last visited with Stock for the 50th anniversary, he looked just about the same.

You could say that Stock comes from good stock.

But let’s get back to the war.

On the day after he graduated from Hamtramck High School in June of 1940. Stock enlisted in the Navy. France and England were already at war with Germany, and the Japanese were aggressively on the move through Asia, threatening to conquer the Philippines and possibly Hawaii.

“I knew we would get into it sooner or later,” Stock said.

Stock said one local Detroit newspaper, the now defunct Detroit Times, was against America’s involvement in the war and would publish grisly photos of trench warfare from World War I to remind readers of war’s horrors.

Those photos convinced Stock of one thing: “I said I’m not going to go into the trenches, no way.”

So off to the Navy he went.

Stock decided to hook up with a repair ship so he could learn a trade. Back then, there were few jobs, and Stock figured he could better his chances for getting one by learning a skill.

But first, he had to survive the war.

Once ashore after the attack began, Stock said he and several other sailors went to a warehouse to gather up cots, figuring there were going to be a lot of causalities before the day was over.
There were lots.

Stock also picked up a gun to fire back at the attackers, and helped move dozens and dozens of 50 gallon drums of gasoline to safety – all while Japanese planes were raining down bombs and bullets.

When evening rolled around, he was given a Springfield rifle from World War I – that’s how unprepared America was for war — and told to go into the cane fields in case the Japanese also were going to attack by land.
That didn’t turn out to be the case.

Stock’s own ship, the Vessel, survived, but needed many repairs. Stock later went to witness other major campaigns in the Pacific in the Vessel, including the bloody battle of Okinawa.

When he was 22 years old, Stock was given leave to visit home. He was quoted in a local paper that, during the Pearl Harbor attack, he came across a 10-year-old girl who was shot in her hip.

“I thought: What the hell kind of war is this anyway,” Stock told the newspaper.

Despite the “massacre,” as Stock calls that day, he told the newspaper he was confident America would prevail.

“Nothing can stop us for long,” he was quoted saying.

Indeed, America roared back, and by 1945 the war in the Pacific and as well as in Europe was over.

But, since Stock enlisted into the Navy as opposed to being drafted, he still had one more year he owed the service. He was shipped off to Washington D.C. for a land job in a machine shop.

He came back about a year later to look for work in either Hamtramck’s police or fire departments. His dad had been a police officer.

He indeed got a job in the Police Department, where he worked for 20 years – 11 years as a detective – until he retired.

He and Camille have two daughters and one son. Stock went back to Pearl Harbor for the 50th and 60th anniversaries but he won’t be going back for the 70th. Each time he was there, the island natives would approach him and thank him for saving their island.

Whenever Pearl Harbor Day rolls around, Stock said he doesn’t do anything particularly special other than go to church.

“And thank the Good Lord,” he said with a slight chuckle.